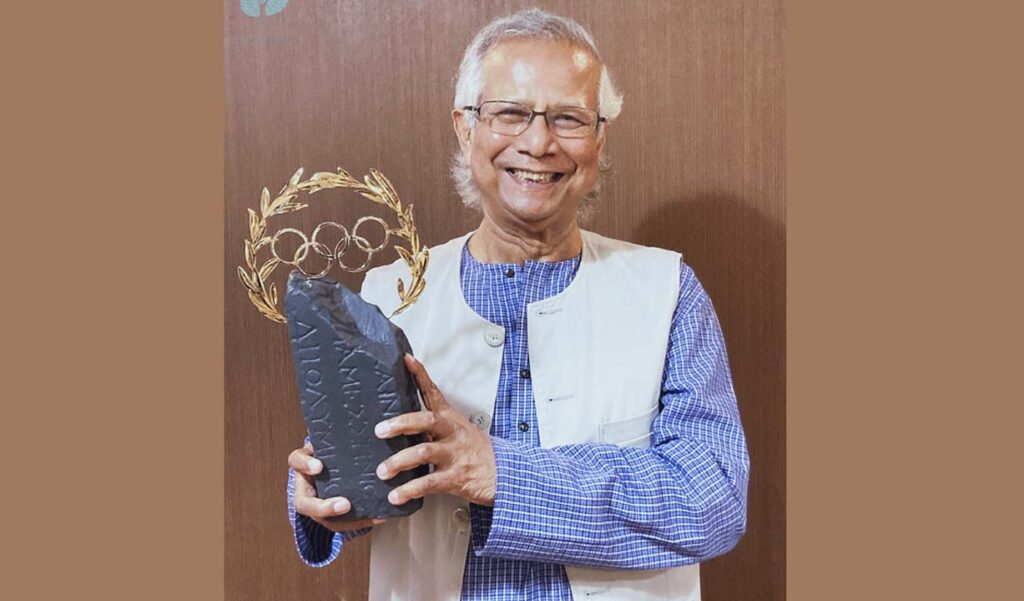 Economist, civil society leader and Nobel Peace Prize awardee Professor Muhammad Yunus became the second recipient of the Olympic Laurel. He officially received the trophy during the Opening Ceremony of the Olympic Games Tokyo 2020 on 23 July 2021. The distinction was created by the International Olympic Committee (IOC) to honour outstanding individuals for their achievements in education, culture, development and peace through sport.

In his acceptance speech Professor Yunus said, “I am honoured and overwhelmed to receive this Olympic Laurel. And so sad I can’t be there with you. The IOC is taking the social dimension of sports very seriously. You, athletes of the world, can provide the leadership in transforming this world and create a world of three zeros: zero net carbon emission, zero wealth concentration to end poverty and once for all, zero unemployment by unleashing the power of entrepreneurship in everyone. I wish IOC success with its mission to help transform this world to a more peaceful world through sports. I wish all of you, best of luck for your competitions.”

Professor Muhammad Yunus receives the Olympic Laurel award for his extensive work in sport-for-development including founding the Yunus Sports Hub, a global social business network that creates solutions through sport. He has collaborated with the IOC on several projects including educational elements of the IOC Young Leaders Programme, the “Imagine” Peace Youth Camp and the Athlete365 Business Accelerator – the first comprehensive entrepreneurship programme to help career transition for Olympians.

IOC President Thomas Bach said: “With the Olympic Laurel we take forward the vision of Baron Pierre de Coubertin, founder and renovator of the Modern Olympic Games. It is also a reflection of the ideals and values of the Ancient Olympic Games, with a focus on human development through peace and sport.”

He continued, “The work of Professor Yunus is exemplary for these ideals and values. He shares his wealth of knowledge generously with the athletes and the Olympic community. He is a great inspiration for all of us. He helps athletes in their post sport career development to become socially responsible entrepreneurs and shares our vision how sport can contribute to the Sustainable Development Goals of the United Nations. In particular, with Paris 2024, he helps to build a new model for the Olympic Games with minimum impact for the planet and maximum impact for the legacy for the people of the host country. We are very thankful for all he is doing for the Olympic Community.”

Professor Yunus says, “The Olympic Games and sport have the most convening power in the world. The Olympic Games unite the entire world in peaceful competition, celebrating unity in diversity. North and South Korean athletes marching together in the Parade of Nations at the 2018 Winter Olympics in Pyeongchang was a powerful reminder of the immense potential of peace through sport. The Olympic Truce takes forward the vision of building a better world based on fair competition, peace, humanity and reconciliation.”

“We can use this power to change the world in the most effective ways. Sport has the power to transform lives by galvanising the world, and social business can be the most efficient tool to unleash this power.”

Initiated at Rio 2016, the Olympic Laurel is to be awarded at the opening ceremony of each summer edition of the Olympic Games. Symbolising the connection with the ancient Olympic Games, the base of the trophy is a replica of a stone from the site of Olympia, Greece.

The creation of the Olympic Laurel is one of the initiatives that emerged from recommendation 26 of Olympic Agenda 2020, the strategic roadmap for the future of the Olympic Movement, to further strengthen the blending of sport and culture. The first ever Olympic Laurel was awarded to the Kenyan Olympian and social changemaker Kip Keino on August 5, 2016 in Rio de Janeiro.

Jury member Naomi Kawase mentioned, “The Olympic Laurel is conferred upon outstanding individuals who help build a better world, using the power of sport to harness change and positivity. You will see that this year’s recipient is internationally recognised for relentless work in the empowerment and upliftment of disadvantaged sections of society.”

Professor Yunus is the recipient of numerous international awards for his ideas and endeavours and is a member of the board of the United Nations Foundation. In 2006 he was awarded with the Nobel Peace Prize for founding the Grameen Bank that pioneered the concepts of microcredit and microfinance for people living in poverty. He has also pioneered the concept of Social Business, a non-dividend business that is created to address social problems.