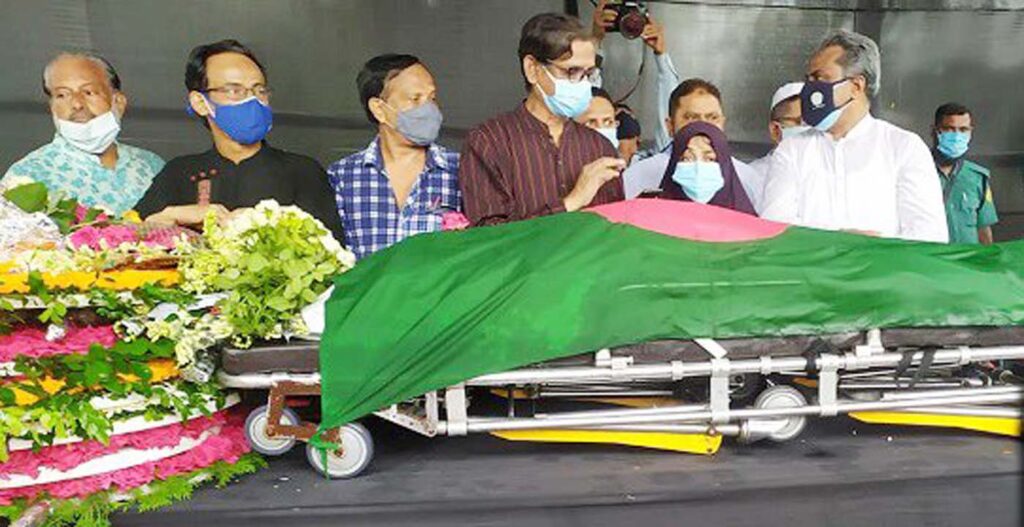 Fakir Alamgir, a freedom fighter and artist of Swadhin Bangla Betar Kendra, died of coronavirus while undergoing treatment. He died at the United Hospital in Dhaka on the night of July 23. He was 71 years old at the time of his death.

Mashuk Alamgir Rajib, son of musician Fakir Alamgir, said that Fakir Alamgir had a heart attack while he was on ventilation in the Covid unit around 10pm on Friday. At 10:57 pm, Dr. Amina Sultana, in-charge of the Covid ICU unit of United Hospital, declared him dead.

Earlier on July 19, a medical board was formed comprising specialist doctors of Fakir Alamgir’s United Hospital. When his condition deteriorated around 10 pm on July 18, the doctors decided to keep him on ventilation.

Meanwhile, people of all walks of life paid homage to the body of musician Fakir Alamgir at the central Shaheed Minar in Dhaka on July 14 at noon.

His body was taken to the Shaheed Minar at 11:45 am. There, the body was paid homage with flowers till 1:45 pm.

Earlier at 11 am, a guard of honor was given to this heroic freedom fighter at the Pallima Sangsad ground in Khilgaon; His first janaza was performed there. After the second janaza at the Khilgaon Matir Mosque after Johar, Fakir Alamgir was buried at Taltola Cemetery.

It may be mentioned that on July 14, Fakir Alamgir was found infected with coronavirus. A day later, on July 15, he was admitted to the hospital with fever and shortness of breath. He was treated in the ICU of United Hospital in Dhaka. In Corona, 60 percent of his lungs are infected.

Fakir Alamgir was an artist of Swadhin Bangla Betar Kendra during the War of Liberation. Earlier, as a member of the Kranti Shilpi Gosthi and Gono Shilpi Gosthi, he made outstanding contributions to the mass uprising of 1969. After independence, Fakir Alamgir became involved in pop songs. He was awarded the Ekushey Padak in 1999 for his contribution to music.