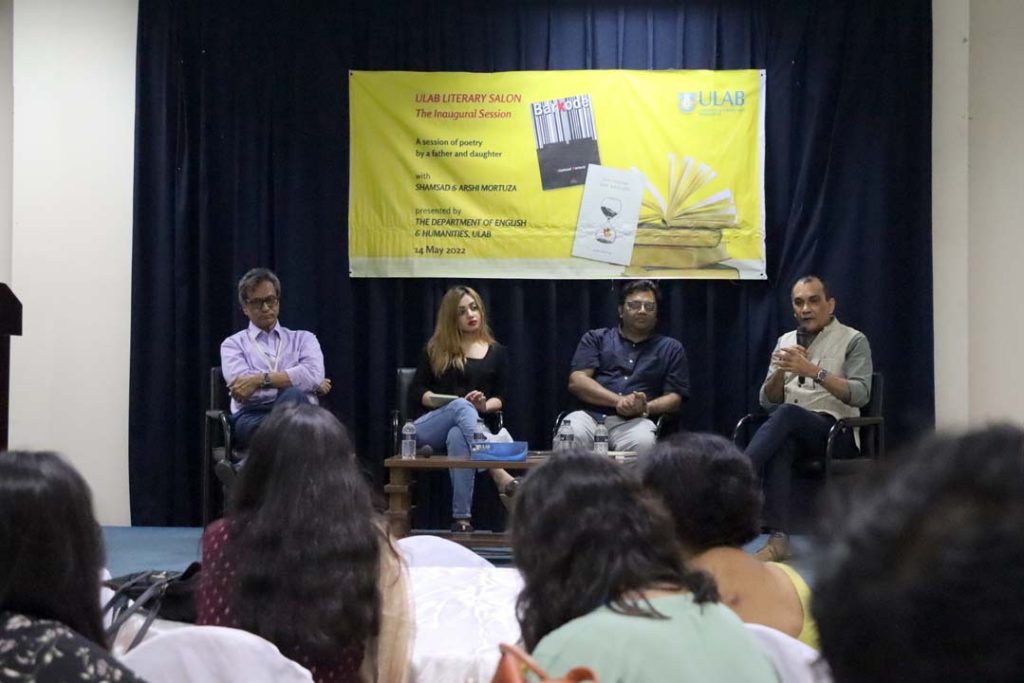 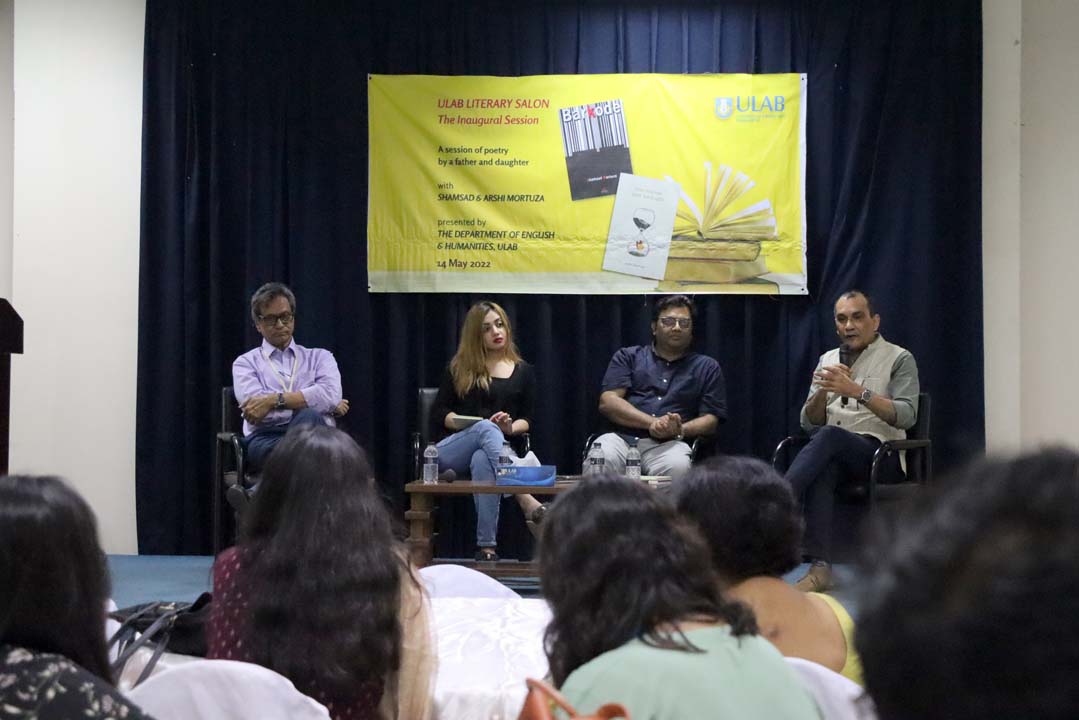 The Department of English and Humanities at the University of Liberal Arts Bangladesh kicked off a one-of-a-kind university-based literary adda, The ULAB Literary Salon, on May 14, 2022. The inaugural event featured a father-daughter poet duo, both of whom are ULABians. Professor ShamsadMortuza, Pro Vice-Chancellor, ULAB, and Dean of the School of Arts and Humanities, and his daughter, ArshiMortuza, Lecturer in Englishat Southeast University, recited poetry and discussed what inspires them to write and create.
Presided over by Professor Kaiser Haq, poet, critic, academic, and mentor to the ULAB Literary Salon, the event was moderated by Sudeep Chakravarti, writer, researcher, and Associate Professor at the Department of Media Studies and Journalism, and the Department of English and Humanities, ULAB.
Professor Shamsad Mortuza initiated the poetry recital, during which he largely focused on the art and craft of writingpoems as he read from his poetry collection Barkode (2013). His readings were accompanied by anecdotes and nostalgic musings on writing and studying poetry as a person of color in the United Kingdom where he was doing his Ph.D.
ArshiMortuza read selected verses from her debut poetry collection,One Minute Past Midnight(2022), while discussing her fascination with disillusionment, writing on topics such as depression, anorexia, mental health, postcolonialism, and discussing her personal approach to writing.
The readings and discussion were followed by a question-and-answer session. Members of the audience expressed interest in finding out more about the poets’ experience with writer’s block and writing for an audience, as well as with writing for one’s family.
The ULAB Literary Salon aims to offer a space for literature enthusiasts in Dhaka and around the country to come together and celebrate literature. Each month, The ULAB Literary Salon will organize book launches, book readings, author signings, and discussions with authors and publishers, and present a meeting hub for writers, editors and academics in ULAB’s centrally-located Research Building on Satmasjid Road, Dhanmondi, Dhaka.
The next Literary Salon event, scheduled for June 18, 2022, will launch Saad Z Hossain’s latest science fiction novel, Cyber Mage, which is being published by ULAB Press.
The inaugural event was hosted by Sarah Anjum Bari, Adjunct Lecturer at the Department of English and Humanities, ULAB, and Editor, Daily Star Books. Bookworm Bangladesh was a partner. The event was attended by a large audience comprising students and faculty of ULAB as well as guests from all around Dhaka.