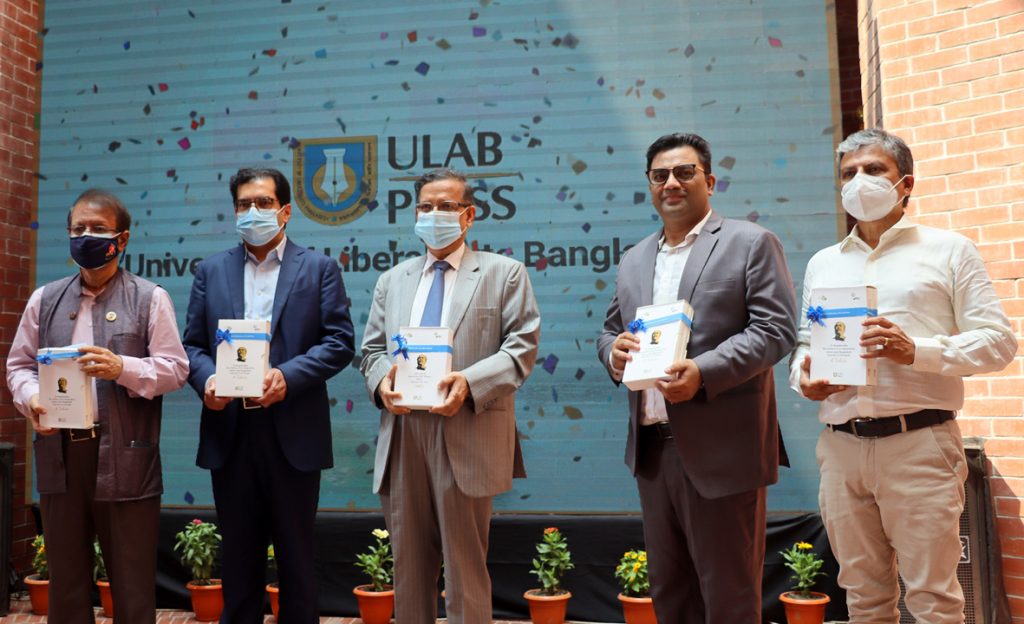 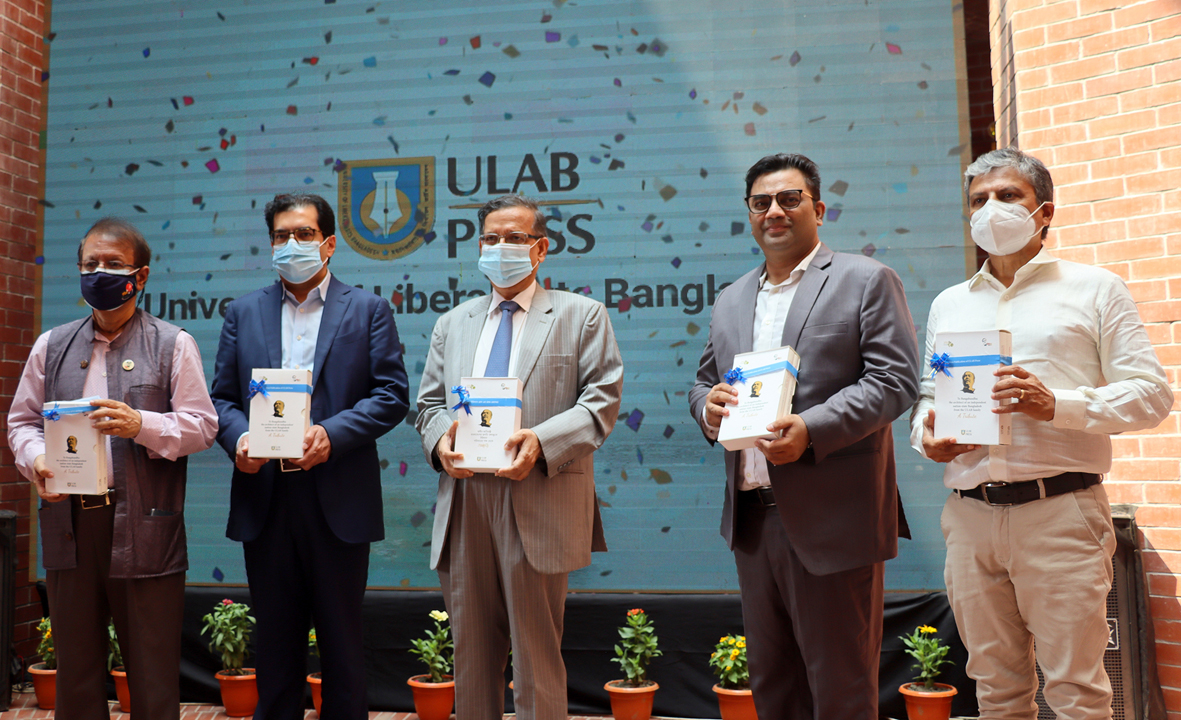 University of Liberal Arts Bangladesh (ULAB) organized a book launching ceremony of its bilingual volume titled “Commemorating Sheikh Mujib: The Greatest Bengali of the Millennium” on 7th October 2021, Thursday at the university’s permanent campus premise in Mohammadpur. Honourable Minister, Ministry of Law, Justice and Parliamentary Affairs Anisul Huq, MP, graced the event as the Chief Guest, while Dr Kamal Abdul Naser Chowdhury, Chief Coordinator of the National Implementation Committee for the Celebration of Mujib Borsho, attended as the Special Guest, and Member of ULAB Board of Trustees Kazi Nabil Ahmed, MP attended as the Guest of Honour.

The unveiling ceremony began with the ULAB theme song and a brief documentary introducing the University. In the opening remarks, ULAB’s acting Vice-Chancellor Professor Dr Shamsad Mortuza said, “ULAB is the first university after Dhaka University to get the approval of the academic press which will be a platform to promote, nurture, and publish both creative and academic works.” He further added, “This bilingual volume is written to commemorate the man who is the best Bengali of the millennium; for us, he is the architect of our independent state.”

In a video message, National Professor Dr Rafiqul Islam said, “We have presented our ideas and comments about Bangabandhu in this book. I feel extremely fortunate to have the opportunity to edit this book.”

The chief guest, Honourable Minister for Law, Justice and Parliamentary Affairs, Anisul Huq appreciated ULAB for the publication of the volume. In his speech, he said, “After the assassination of Bangabandhu and his family on 15 August 1975, there were efforts underway to make him forget. That situation has changed. Our Honourable Prime Minister Sheikh Hasina, leader of the people, has presented us with The Prison Diaries. Without her, The Unfinished Memoirs would not have been published, and we would not have known Bangabandhu. The publication of such a book today is a remarkable example of the enriched knowledge we gathered from the mentioned sources.”

The special guest, Dr Kamal Abdul Naser Chowdhury, Chief Coordinator of the National Implementation Committee for the Celebration of Mujib Borsho, said, “We have to inform the young generation about the philosophy of Bangabandhu.” He adds, “Bangabandhu’s idea of nationalism against discrimination should also be addressed to all. Only then will we be able to honour Bangabandhu.”

The Guest of Honour, member of the ULAB Board of Trustees Kazi Nabil Ahmed, MP, said, “We are delighted to publish the book written on Bangabandhu Sheikh Mujibur Rahman on the eve of ULAB Press’s journey. One of the unique features of this book is that the authors of this book are all members of our ULAB family. The founder of ULAB, Kazi Shahid Ahmed, has established this university with the vision of creating craftsmen to build an ideal Bangladesh.” Our goal was that our students would study not only BBA, Computer Science but also Economics, Language, Literature, Culture. ULAB was the first among the private universities to make Bangla Language a compulsory subject at the university level in Bangladesh.”, he added.

The bilingual volume is a maiden publication of ULAB Press, edited by the National Professor Dr Rafiqul Islam and Professor Dr Shamsad Mortuza, contains 13 essays by ULAB professors and associates. ULAB Press was formally launched on this occasion. The authors of the book Commemorating Sheikh Mujib: The Greatest Bengali of the Millennium were present at the unveiling ceremony and read excerpts from their works.

Professor Imran Rahman, the special advisor to the ULAB Board of Trustees, concluded the event with his vote of thanks. The event was attended by the ULAB’s Treasurer, Registrar, Deans of the Schools, Heads of the Departments, faculty members, administrative officials, students, alumni, and media journalists.