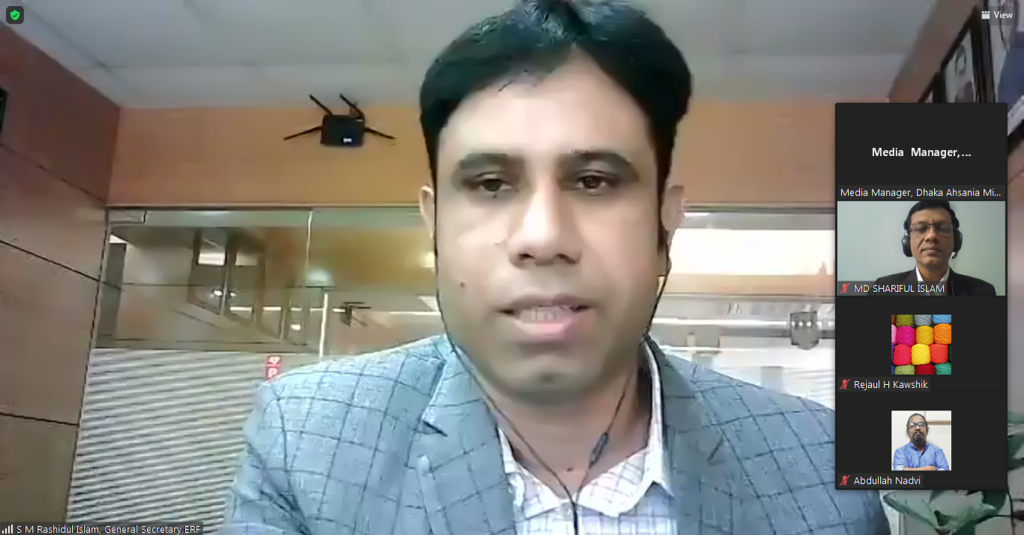 ‘The current tobacco tax structure is extremely complex which is a major obstacle in the way of discouraging tobacco use. And for that, we have to simplify this tax structure. In that sense, it is possible to reduce tobacco use by increasing tobacco taxes in an effective way”- The speakers expressed their views in a virtual exchange meeting with the members of the Executive Committee of the Economic Reporters Forum (ERF) organized by the Dhaka Ahsania Mission on 15 February on the issue of the tobacco tax.

According to the keynote, when the Prime Minister set the goal of building a tobacco-free country by 2040 in 2016, she directed to simplify the existing tax structure and increase the government’s customs revenue by learning from the best practices in the region.

In this context, citing the example of the Philippines, the Philippines has benefited from the implementation of the Sin Tax Reform Act 2012. There is a four-fold increase in excise tax, which increases retail prices in one fell swoop, bringing down the smoking rate from 28 percent to 23 percent in six years. The revenue received also increases.

The possible outcome of the implementation of the proposals is that if the government increases the tobacco tax, the proportion of cigarette users will be 15.1% to 14.03%. 13 lakh adults will quit smoking and 9 lakh young people will stop using cigarettes. Besides, 8 lakh 90 thousand premature deaths can be prevented. And 9,200 crore additional revenue will be collected from the sale of cigarettes.

Iqbal Masud, Director, Health and Wash Sector, Dhaka Ahsania Mission, said Bangladesh is one of the countries with the highest prevalence of non-communicable diseases. In addition, tobacco use is considered to be one of the causes of non-communicable diseases. Therefore, it is necessary to increase the tobacco tax to reduce the use of tobacco. It is our expectation that the journalists of the Economic Reporters Forum will draw the attention of the government to increase the tobacco tax through their writings.

SM Rashedul Islam, general secretary of the Economic Reports Forum, said the media always focuses on issues that are in line with public health. The media will therefore be by its side as a partner in anti-tobacco activities. In various meetings with the NBR, the Economic Reports Forum always highlights issues related to public health. We will continue to be actively involved in the future.

Md. Mostafizur Rahman, former Chairman of Bangladesh Chemical Industry Corporation (BCIC) and Lead Policy Advisor of Campaign for Tobacco-Free Kids Bangladesh, said that the tobacco tax structure in Bangladesh is complex. Tax rates vary according to the type, characteristics, price level of tobacco products. As a result, tobacco products remain readily available and the rate of tobacco use remains almost unchanged. The proposed specific supplementary duty will simplify the tax structure of cigarettes. Supplementary duty may be increased from time to time in line with inflation and rising incomes. It will be possible to estimate revenue more effectively.

Shafiqul Alam, vice-president of the Economic Reports Forum, said, “We also want to see the country tobacco-free.” Therefore, besides taking various effective initiatives, it is important for the government to bring to the notice of the government through the National Board of Revenue the increase in tobacco tax for the protection of public health in tobacco control. He expressed confidence that members of the Economic Reports Forum would be actively involved in anti-tobacco activities.