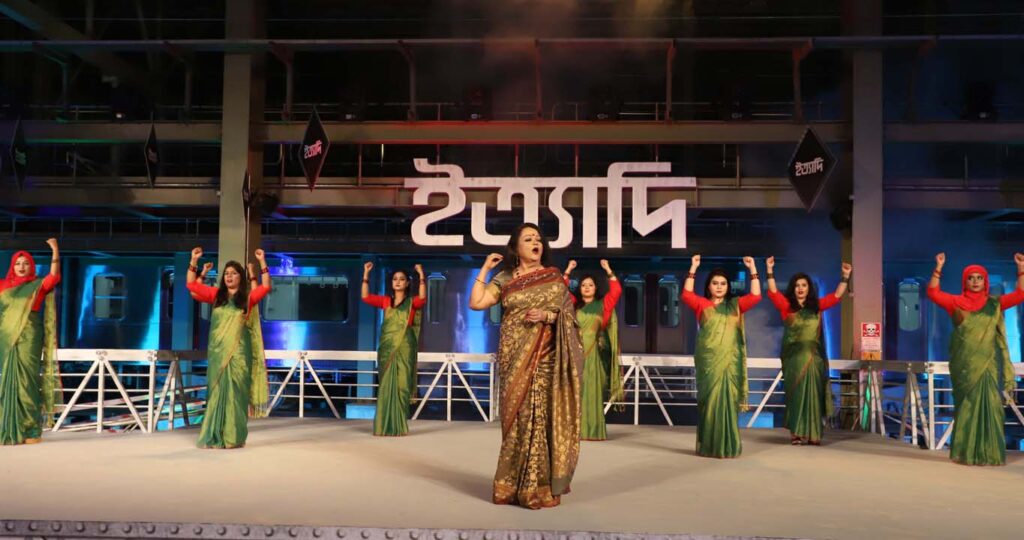 This year’s Ettadi has been filmed at the depot of Metrorail Line-6 ​​at Diabari in Uttara, Dhaka, in a continuation of our history, heritage, civilization, culture and important places. This episode was held on July 16 in a workshop at the first destination of the country’s first remote controlled electric metro train. Due to Corona, no spectators were invited to the event for the first time. As such, this is the first show without viewers. The event is held on an illuminated stage built in harmony with the metro train from 5 pm to 12 midnight.

There are two songs in the program. In the words of famous lyricist Mohammad Rafiquzzaman, to the tune of Monowar Hossain Tutul, Sabina Yasmin sang a patriotic song. The choreography of the song was attended by some architects and engineers of Dhaka Mass Transit Company. Recently a song sparked a storm of discussion and criticism through social media. In this episode of Ettadi, the real history of the song has been highlighted as well as the doctors who have been invited to the stage, whose dance song has gained skyrocketing popularity. Besides, artist Tasiba has been invited. A new song was recorded for Tasiba in this episode of collected words and tunes. The music of the song has been arranged by young music director Naved Parvez. Regular dancers have performed dances with the song.

This episode will be aired simultaneously on BTV and BTV World on July 30, Friday at 8 pm on Bangla News. Ettadi written, directed and presented by Hanif Sanket. Created by Fagun Audio Vision & sponsored by Keya Cosmetics Limited.