Celebrated director Amitabh Reza’s much-talked-about movie ‘Rickshaw Girl’ is going to be screened in 52 cities across 18 states of the United States. The multiple award-winning film is going to be shown in the following states: New York, New Jersey, Philadelphia, Texas, Massachusetts, Virginia, Maryland, Florida, Ohio, Oklahoma, Louisiana, Arizona, Oregon, North Carolina, Illinois, Michigan, Washington, and California.
The premiere of Rickshaw Girl was held at Manhattan’s famous movie theater ‘Village of East by Angelika’ on Thursday (May 5). Minister of State for Information and Communication Technology (ICT) Zunaid Ahmed Palak and Minister of Liberation War Affairs AKM Mozammel Haque attended the screening in New York. The film will be screened in almost every major city in the United States. Bioskope Films is in charge of screening ‘Rickshaw Girl’ in the United States.
Meanwhile, at the premiere, audiences showed their love and appreciation towards director Amitabh Reza Chowdhury, associate producer Assaduzzman Sokal, co-producer Mahjabin Reza and main actress Novera Rahman, Momena Chowdhury, and others. Moreover, movie lovers got the opportunity to meet the associated cast and crew members and participate in a Q&A session with the director. 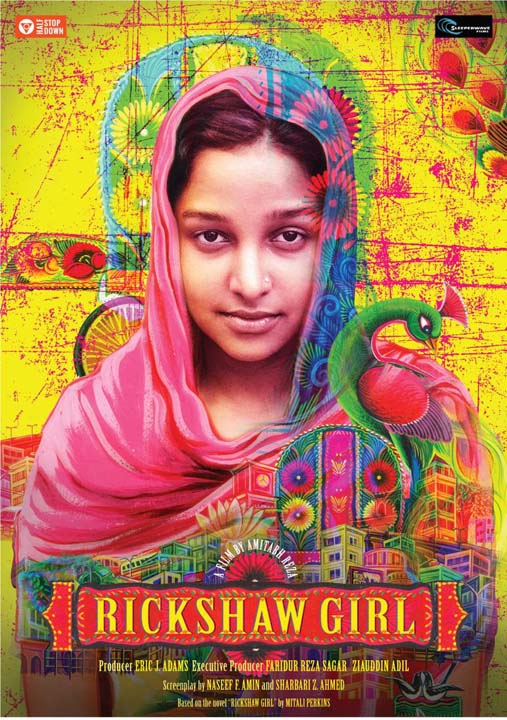 Amitabh Reza, director of Rickshaw Girl, said, “I am amazed at the incredible response we got at the very beginning of our journey in the USA. Local residents and Bangladeshi immigrants have seen the film with much enthusiasm. ‘Rickshaw Girl’ will be screened throughout the month of May in all the major cities of the United States. I would like to invite everyone to enjoy this film:”
Type ‘MOVIE’ and send it to ‘+1(888) 474-0256’ to know the time and place of the Rickshaw Girl screenings.
Amitabh Reza entered Bangladesh’s film arena through his film ‘Aynabaji’, which gained huge popularity. Rickshaw Girl is Amitabh Reza’s second film and is yet to be released in the theaters. The film is based on a middle-grade novel by Indian-American writer Mitali Perkins. The plot of the film centers around a teenager named ‘Naima; actress Novera Rahman played the role of Naima. The film also stars Champa, Momena Chowdhury, Naresh Bhuiyan, Allen Shubro, and others. The screenplay was co-written by Naseef Faruque Amin and Sharbari Zohra Ahmed.
‘Rickshaw Girl’ has received critical acclaim and won awards in various film festivals, including the Prescott Film Festival in the United States and the SCHLiNGEL International Film Festival in Germany. The film is a joint production of Bangladesh and the United States; the producers are Ziauddin Adil, Faridur Reza Sagor, and Eric J. Adams.