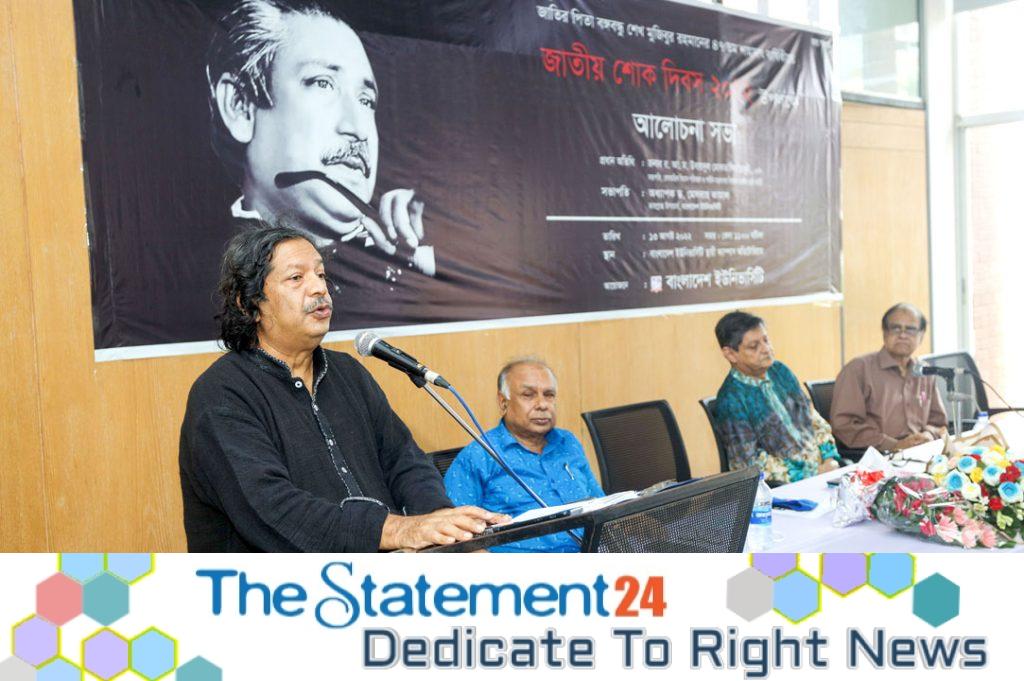 The National Mourning Day-2022 and the 47th martyrdom anniversary of the Architect of Independence and Father of the Nation Bangabandhu Sheikh Mujibur Rahman were held at the permanent campus of Bangladesh University (BU) at Adabor in Dhaka on August 13, 2022.

The chief guest in his speech pointed out that many leaders were born on his soil but only Bangabandhu with his charismatic leadership made it possible to establish an independent and sovereign state Bangladesh by name. We were subjugated. Bengalis were never independent before 1971. He also highlighted the contribution of Bango Mata Fazilatunnessa Mujib to lead him on the right track from behind at the turning point of history How she took the efforts to pass the 6-point in the Awami League Working Committee meeting while Bangabandhu was in jail, he elaborated in his discussion. He also urges the students to know the facts of history in an unbiased and impartial manner to build up a secular prosperous Bangladesh in line with the dream of the Father of the nation. He remembers and pays due honor to all the martyrs on August 15 of 1975

The Chair acting Vice Chancellor Prof. Dr. Mesbah Kamal, in his address, mentions that Pakistanis want it to be a religion-based state, they talked about backwardness, talked about evil whereas Baaangabandhu wanted a secular state free from oppression politically and economically and urged for an independent Bangladesh without exploitation. He remembered all the martyrs of the mournful August 15, 1975, with deep reverence.

The program started with the welcome address by the acting Treasurer of BU Mr. Kamrul Hasan. Among others Controller of Examinations, Prof. Amirul Alam Khan spoke on the occasion All Heads of the departments, faculty members, high officials of the university and a huge number of students were present in the program.