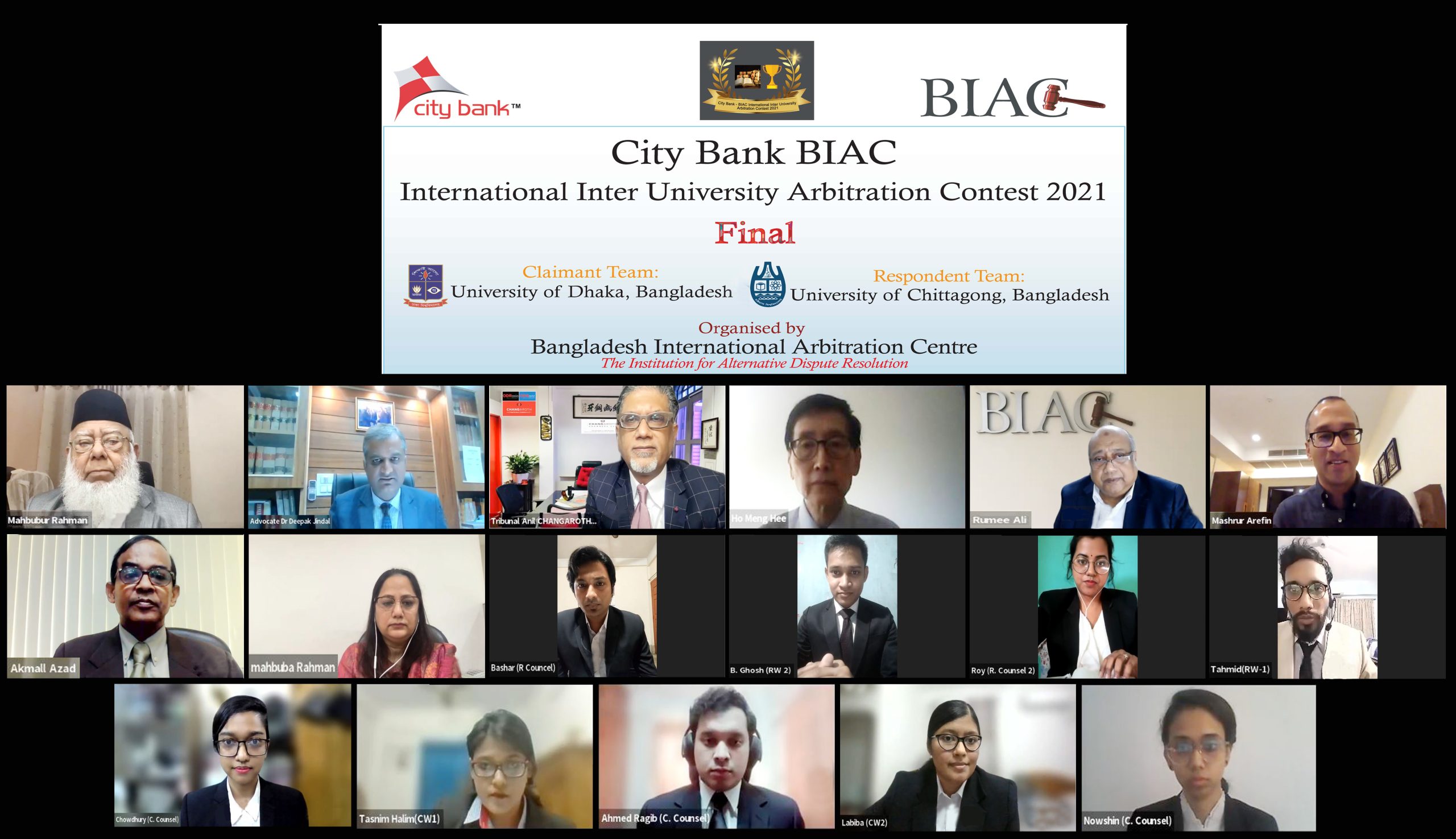 Speaking on the occasion BIAC Chairman Mahbubur Rahman said that the upcoming legal professionals should be aware of the skills and learning that is required to resolve commercial disputes outside the court. So BIAC has taken a stance for students of Law from home and abroad to learn the characteristics of the arbitration process, as to how the parties opt for private dispute resolution in the real world and to provide an equal opportunity for the students to witness the entire legal process and technical spectrum of the arbitration proceedings that is much needed for them, Rahman emphasised.

BIAC hosted this Arbitration Contest to provide national and international students of Law a practical knowledge of ADR and to give them the opportunity to arbitrate a real case acting as Claimant and Respondent in a real-life scenario. Seven Universities from India, Pakistan and Bangladesh participated in the Contest, which was sponsored by the City Bank Limited. In the Finals Dr. Deepak Jindal, Advocate, Punjab and Haryana High Court, Chandigarh and Member, Governing Council, The International Centre for Alternative Dispute Resolution, India was the Tribunal Chairman. Along with him there were two Members of the Tribunal, namely, Anil Changaroth, Managing Director, ChangAroth Chamber LLC, Singapore and ChangAroth InterNational Consultancy, ODRasia & ODRanz, Asia Pacific; and Ho Meng Hee, Director, Alternative Dispute Resolution, Financial Industry Disputes Resolution Centre (FIDReC), Singapore.

Guest of Honour to the event Mashrur Arefin, Managing Director & CEO of the City Bank Limited, in his address said that initiating such Inter-University International Arbitration Contest will bolster the process of bringing change in the mindset of people. He hoped that this will encourage our legal minds to experience the pros and cons of the most popular form of ADR, i.e. Arbitration, which will eventually assist us all to realise the benefits of doing away with conventional litigation system by taking the faster ADR route. Arefin also announced that the City Bank Limited will continue to be the title sponsor of this annual Contest for the year 2022 and 2023.

Muhammad A. Rumee Ali, Chief Executive officer of BIAC in his address said that after the success of the national contest held in 2020, we felt that our future law professionals would gain from an exposure to an international contest. With a view to create awareness and enlighten the students of Law in the study and practice of ADR beyond our borders, the current international contest has been launched. Rumee Ali hoped that the event will allow participants and the audience to experience how real life dispute resolution techniques are used in arbitration.

In his Welcome Address Director of BIAC M A Akmall Hossain Azad said that by hosting this Contest BIAC is trying to draw attention of the business community, the legal professionals and the financial sector to the issues and problems of mitigating commercial disputes out of courts given the backlog of 3.9 million under trial cases in all the courts of Bangladesh only. He also gave an account of BIAC’s recent activities including working experience with a number of Ministries towards building a stronger ADR structure in the country.