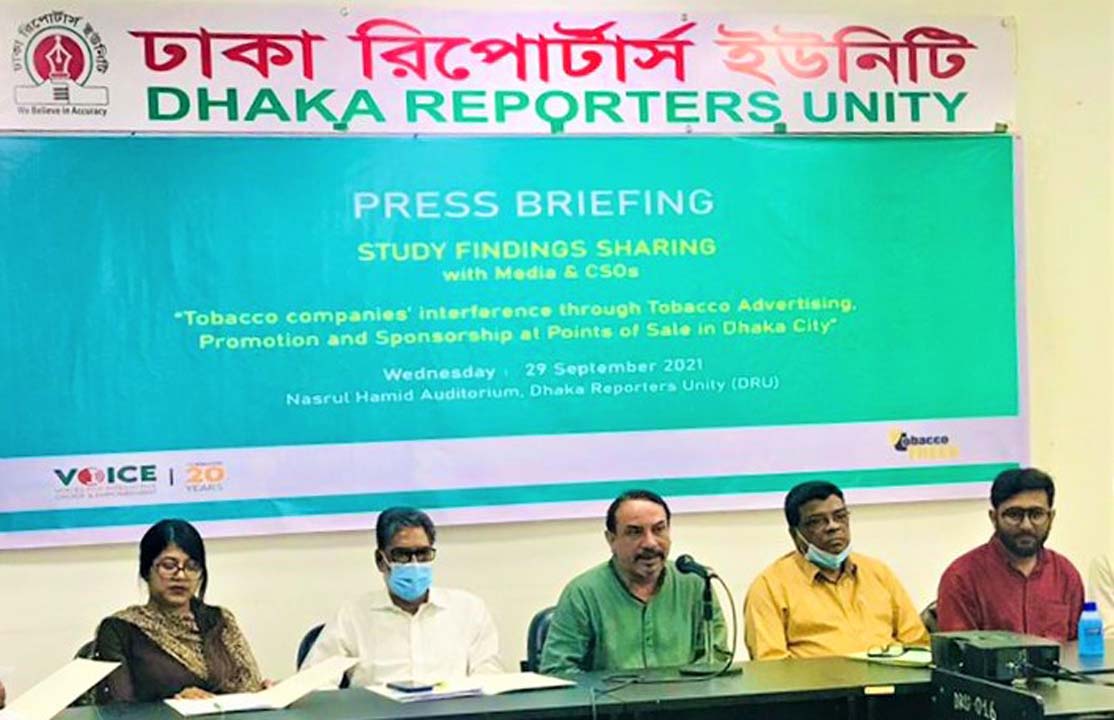 Taking advantage of loopholes in the Smoking and Usage of Tobacco Products (Control) Act (2005), tobacco companies resort to ill tactics such as incentivizing and even pressurizing dealers and vendors in different forms to display and promote their products at points of sale found a recent study conducted by Voices for Interactive Choice and Empowerment (VOICE) titled “Tobacco Companies’ Interference on Tobacco Advertisement, Promotion and Sponsorship (TAPS) at Point of Sale(POS) in Dhaka city”. The study findings were disseminated today at a press briefing held at Dhaka Reporters Unity.

Supported by the Campaign For Tobacco-Free Kids (CTFK), the study recommends that the Smoking and Usage of Tobacco Products (Control) Act (2005) should be strengthened to ban product display at Points-of-Sale.

He added that they offer “Best Seller” awards each year for top performers. Both British American Tobacco (BAT) and Japan Tobacco International (JTI) also offer incentives— such as celebratory dinners and free trips at home and abroad for dealers, wholesalers, and vendors.

When launching new products, tobacco companies do rampant marketing through public relations agencies, including spot marketing and distributing marketing materials on a large scale with complete disregard to the tobacco control law.

The existing Tobacco Control law prohibits creating or distributing advertisements. But employing ill tactics such as advertising through product display at the point of sale and conducting illegal promotional activities was observed in the study regularly.

The speakers said such marketing tactics are violating the law and such activities lead to more advertising to encourage the use of Tobacco, especially by young people.

Former Health Minister, Professor Dr. AFM Ruhul Haque, MP said that nowadays people are quite aware against smoking but if the tobacco companies violate the law in the interest of making a profit, then law-related concerns should be strict. He urged to amend the existing tobacco control law and include strict provisions to specifically ban product display and advertisement at point of sale. And he also asked every walk of society to support lawmakers for amending the law.

Prof Dr. Habibe Millat, MP said that necessary steps should be taken to amend the law and specifically ban all sorts of advertising. A more alarming issue is children are being affected and we will talk about this issue in parliament. This research-based evidence of tobacco companies’ TAPS violation at points of sale will help us talking in the parliament to amend the existing tobacco control law.

Mostafizur Rahman from CTFK told this landmark study shows that the tobacco companies are working against the Prime Minister’s vision of a tobacco-free Bangladesh by 2040.