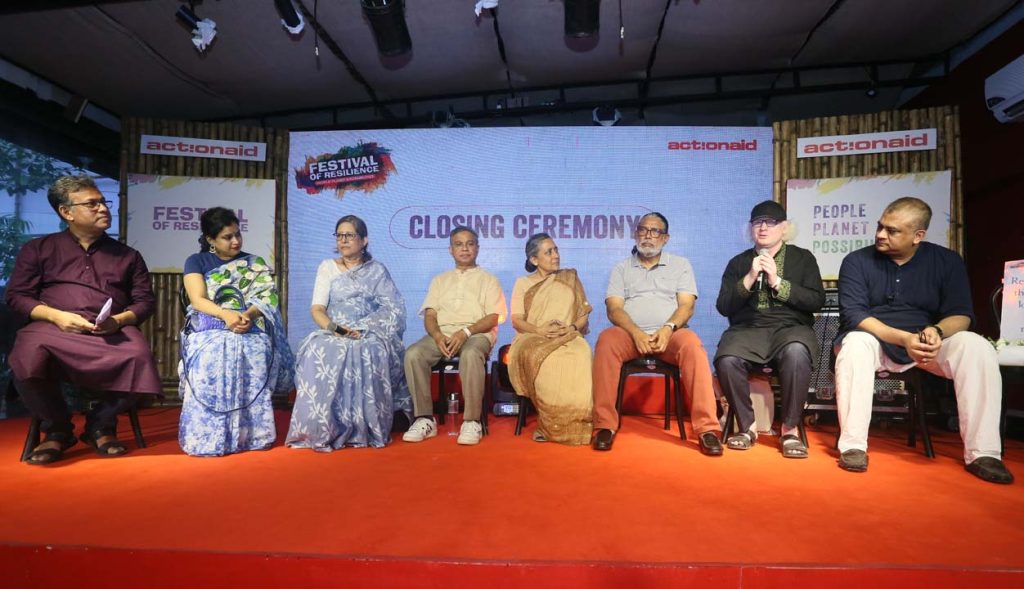 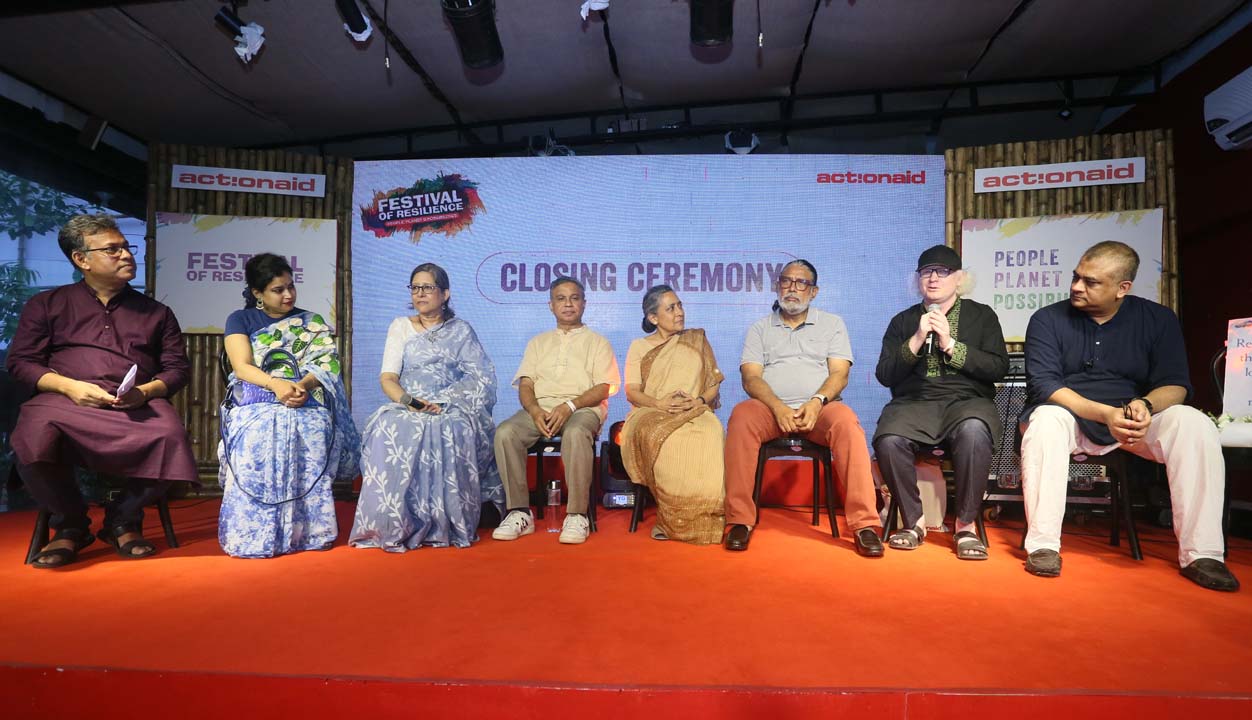 To celebrate the resilience of communities of Bangladesh and the country’s glorious heritage, culture, and traditions, ActionAid Bangladesh (AAB) organized a 2-days long festival, titled ‘Festival of Resilience: People, Planet and Possibilities.’ Centering around the strength of Bangladesh’s people to strive and rise against all odds, the festival aims to encourage celebration and participation among communities in recognition of their stories of resilience.
The festival took place on 9 and 10 June 2022 at Dhaka’s “NCC” (Naveed’s Comedy Club) in Gulshan 2.
For decades, the people of Bangladesh have faced countless challenges, such as climate and human-induced disasters, inequalities, economic instability, refugee crisis and pandemic. But every time, the mass bounced back with the power of resilience and survived with renewed vigor. A very recent example would be the last two years, during the peak of the COVID-19 pandemic, when the collective effort of the people of this country helped communities to stay hopeful and agile, despite all the uncertainties and despair.
This innate quality and resilience of people are worth celebrating and hence ActionAid Bangladesh organized this festival. Through a wide and immersive range of activities, the festival helped to celebrate the people, their strength, joy, and solidarity.
Day 01 (June 09) key attractions included– a performance by Happy Home girls; inauguration of exhibition and kiosks; dialogue on ‘Multi-dimensional perspective of resilience,’ featuring Farah Kabir (Country Director, ActionAid Bangladesh), Dr. Maleka Banu (General Secretary, Bangladesh Mahila Parishad), etc. There was also a special ‘She-tales,’ segment, involving women leaders from the community who shared their tales of courage and resilience, and a cultural performance by the AAB Band. Remarks by Dr. M Khalilur Rahman (Member of the General Assembly, AAIBS) marked the conclusion of the first day’s arrangements.
Mosa Morium is an example of extraordinary leadership capacity and courage. She belongs to a conservative society where women’s mobility is not very well accepted. Though she comes from a financially poor household, she was able to complete her primary school education. But despite much adversity, Morium has emerged as a women leader in her community, only because of her strong willingness to serve her community.
On day 02 (June 10), Mr. Espen Rikter-Svendsen, Ambassador, Royal Norwegian Embassy in Dhaka and Ms. Nayoka Martinez-Backstrom, First Secretary, Environment & Climate Change, Embassy of Sweden in Dhaka were present as special guests. The event started with a flash mob by the young participants of the Activista Network of ActionAid Bangladesh. There were three ‘Human Book Café sessions with distinguished speakers – Imtiaz Ahmed (Professor of International Relations & Director of Centre for Genocide Studies, University of Dhaka); Naveed Mahbub (Popular Comedian and Columnist); Tania Wahab (Entrepreneur); Afsan Chowdhury (Journalist and Researcher); Shameem Akhtar (Filmmaker and Media Activist); Shakil Ahmed (Futurist, Educator, and Storyteller at Ridiculous Futures); Mahrukh Mohiuddin (Managing Director – The University Press Limited); Afzal Hossain (Popular Actor and Director); and Ahsan Rony (Founder – Greensaver). The day ended with a mesmerizing performance by the renowned band “Joler Gaan’s” cultural performance.
“We organized this festival of resilience for the first time to highlight the different stories of resilience from our communities, to create a bridge between people from all walks of life and especially provide an opportunity for people from the grassroots level to share their stories of courage, contribution and resilience. People, planet and possibilities – the theme of this festival is a reminder to all that if we want a different world is possible” said Farah Kabir, Country Director, ActionAid Bangladesh.
Afsan Chowdhury (Journalist and Researcher) said it is rare to find such events where a dynamic panel of experienced people all came together to share their views on where Bangladesh stands today and where are we heading as a nation. Such practices can enlighten us on how a nation was formed in 1971, with the combined effort of a diverse group of people. The more we learn about how the foundation of our nation was laid in 1971, the better we can progress.
There were exciting games, live story-telling sessions and different stalls as well, where different handicrafts, boutique and food items were available to purchase. Exhibition (Photo, Arts, crafts, audiovisuals, etc.) and stalls of Aaurhi Trust, Barir Jeenish-Happy Home, Cox’s Bazar Rohingya Response was there at the festival.