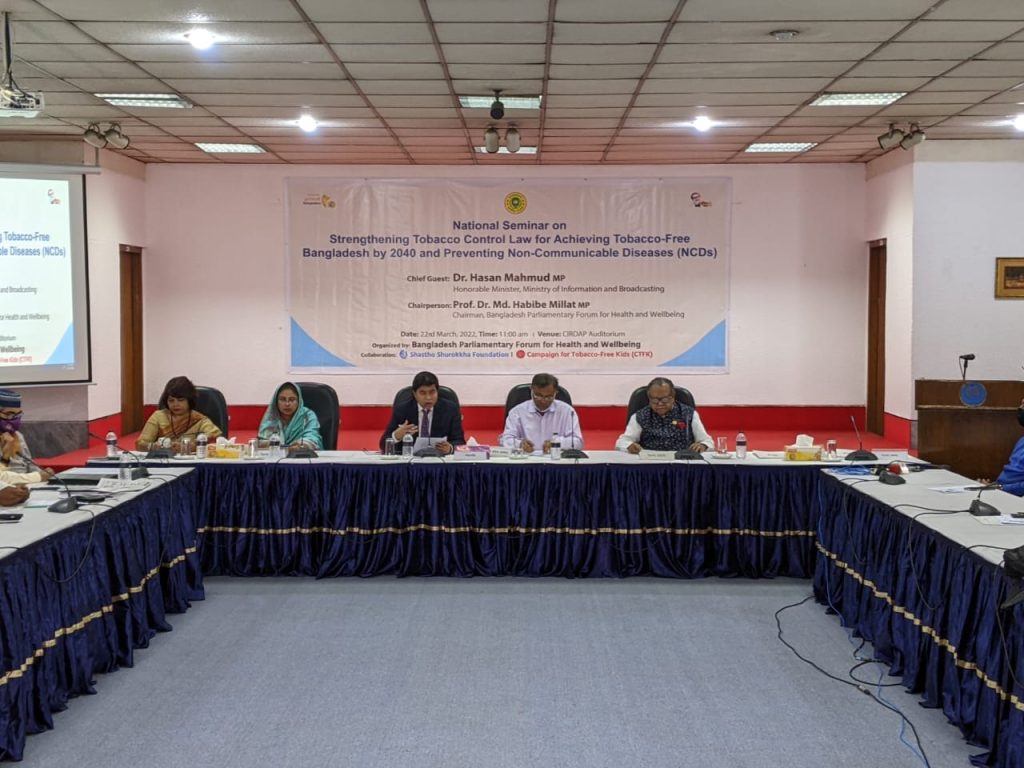 To protect public health, the Prime Minister announced that it is necessary to amend the existing tobacco control law to implement Tobacco-Free Bangladesh by 2040. In this situation, it is necessary to run a coordinated strong campaign at all levels, said the Minister of Information. Hasan Mahmud MP.

The information minister stated at a national seminar on ‘Achieving a Tobacco-Free Bangladesh by 2040 and Strengthening Tobacco Control Laws and Preventing Non-Communicable Diseases (NCDs)’ organized by the Bangladesh Parliamentary Forum for Health and Wellbeing at CIRDAP today, March 22.

The chief guest said Dr. Hasan Mahmud MP said, “Smoking has immensely decreased in our country according to the percentage. I am very happy that there has been a parliamentary forum working on this issue. Our government’s goal is to build a tobacco free Bangladesh by 2040. But it is not far away If the campaign is not right, if the law is not properly enforced. The Ministry of Information is continuing its anti-tobacco campaign from the beginning. The private media must come forward on anti-tobacco campaign. We will achieve the goal if we can run the strong campaign in a coordinated manner. I think a strong campaign is needed to control tobacco.’’

Former Health Minister Prof. Dr. A.F.M Ruhal Haque MP presented as special guest and said, “The way we are working together against tobacco, we will surely succeed in achieving our desired goal. I thank all the anti-tobacco organizations. They are doing a lot of activities. Besides, I am happy with the way the media workers are coming forward in this regard. However, it is necessary to stop the sale of all tobacco products including cigarettes in the vicinity of the school by amending the law. E-cigarettes should be banned. Many people think e-cigarettes are less harmful. But it is wrong. It also hurts equally. We all know that we are in a negative position in terms of non-communicable diseases in the country. Tobacco control is important for the protection of our overall public health.’’

Begum Meher Afroz Chumki MP also presented as special guest. She said, “We are here today to talk about a social problem which has ended with death. Tobacco is extremely harmful to public health. We must all be united against tobacco. We all have to speak out against tobacco in Parliament. All of us who are MPs and people’s representatives have to work on this issue from our respective positions.”

Kazi Jebunnesa Begum, director and additional secretary of the National Tobacco Control Cell (NTCC) said, “Working with tobacco is not only our official duty but also our moral duty. We are trying to include almost all of the recommended amendments. Another thing is that where the Hon’ble Prime Minister has announced, there are no more obstacles. I will say no doubt about the amendment of our law. We are doing as much as possible. We are doing our best and will do it.”

Chairman of the forum Prof. Dr. Md. Habibe Millat MP highlighted the various successes of the forum in tobacco control. He said, “Members of Parliament are carrying out various activities for the protection of public health through Bangladesh Parliamentary Forum for Health and Wellbeing. Following this, on behalf of the Forum, we have sent a letter signed by 152 Members of Parliament along with the Minister of Health requesting to amend the existing Tobacco Control Act. We, along with 153 Members of Parliament, have requested the Hon’ble Prime Minister to issue a DO letter to amend the Tobacco Act including e-cigarettes. I have given a letter to the Finance Minister for tax and price increase on all tobacco products. The health minister has told us that he will amend the tobacco law soon. I know the National Tobacco Control Cell has come a long way. We are hopeful that this initiative will take us a long way in implementing Tobacco Free Bangladesh by 2040 as announced by Hon’ble Prime Minister. ”

Earlier in the program, Dr. Nizam Uddin Ahmed, Executive Director of Health Protection Foundation and Public Health Specialist presented the important aspects of amending the Tobacco Act. In his presentation, it was mentioned that it is necessary to add some issues by amending the existing tobacco control laws. These include a complete ban on smoking in public places and public transport, a ban on the display of tobacco products in sales outlets, a complete ban on the corporate social responsibility (CSR) activities of tobacco companies, and the absence of single sticks / packaging of bidi-cigarettes These include banning the sale of products, banning e-cigarettes and heated tobacco products (HTP) and increasing the size of health warnings illustrated in packets / boxes of tobacco products.