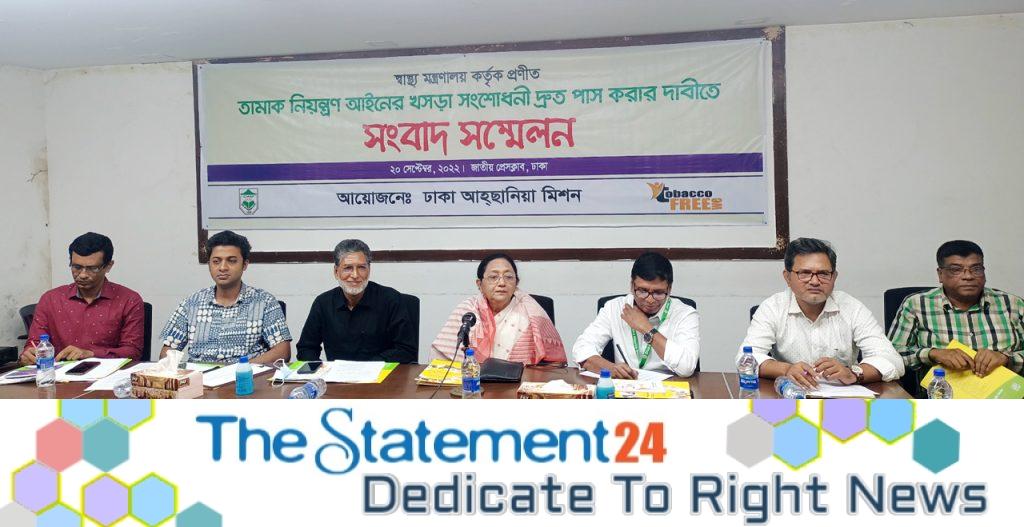 Prime Minister Sheikh Hasina has promised to make Bangladesh tobacco-free by 2040. Shirin Akhter, Member of Parliament of Feni-1 Constituency and General Secretary of Jatiya Samajtantrik Dal (JSD) feel that the draft amendments to the Tobacco Control Act made by the Ministry of Health should be passed quickly for materializing the promise by the PM. He said this in a press conference at the National Press Club on the morning of September 20. The Press Conference was organized by Dhaka Ahsania Mission.
Shirin Akhter also said in the speech of the chief guest in this press conference entitled “Demand for quick passing of the draft amendments to the Tobacco Control Act made by the Ministry of Health” organized by the Dhaka Ahsania Mission, that various institutions can take the initiative to make their institution’s tobacco-free. If iconic institutions like National Parliament and National Press Club can be made completely smoke-free, they will serve as an example. I believe that taking into account the health risks to tobacco workers, initiatives should be taken in areas where it is applicable to reduce tobacco production.
Md. Mostafizur Rahman, Lead Policy Advisor, CTFK-Bangladesh, Nurul Islam Hasib, General Secretary, Dhaka Reporters Unity (DRU) and Ahammed Sarwar Hossain Bhuiyan, General Secretary, Law Reporters Forum (LRF) also spoke in the conference organized in collaboration with Campaign for Tobacco-Free Kids (CTFK). Md Shariful Islam, Project Coordinator (Tobacco Control Project), Dhaka Ahsania Mission presented the conference paper. Sharmin Akhter Rini, Program Officer of Dhaka Ahsania Mission, moderated the session and KSM Tarique, Joint Director, Health & WASH Sector, Dhaka Ahsania Mission presided over the press conference.
CTFK-Bangladesh lead policy advisor Md Mostafizur Rahman said, the initiative was taken by the Ministry of Health and Family Welfare of the Government of the People’s Republic of Bangladesh to bring further amendments to the Tobacco Control Act is undoubtedly a timely and public-oriented initiative. But it still remains a draft. Journalists are expected to present positive information and campaign in favor of the amendment so that the law is quickly passed through the National Assembly to protect the national interest and public health.
General Secretary of Dhaka Reporters Unity (DRU) Nurul Islam Hasib said that one of the ways to reduce the use of tobacco is to enact a strict tobacco control law. I applaud the initiative taken by the Ministry of Health to strengthen the law in this regard.
Law Reporters Forum (LRF) General Secretary Ahammed Sarwar Hossain Bhuiyan said that there is no alternative to amending the Tobacco Control Act to protect the public from the harm of second-hand smoke. We hope that this amended law will be passed soon to curb the tobacco company’s business.
According to the conference paper, the Ministry of Health has recently prepared a draft for further amendments to the ‘Smoking and Usage of Tobacco Products (Control) Act 2005 (Amended in 2013)’. The draft was made available on the website of the health ministry for stakeholder comments. Timely amendment proposals have already received widespread public support. More than 15 thousand organizations and people from different walks of life including citizens, parliamentarians, and doctors have officially expressed their full support for this amendment. But it still remains a draft. Many people fear that there will be various obstacles in the way of converting it into law. Against the amendment, tobacco companies are running various disinformation campaigns and creating public unrest by spreading various misleading information through the media. In this regard, we hope that the journalists will present correct information and support for the amendment through their respective media so that the draft amendment is passed through the national parliament as soon as possible.