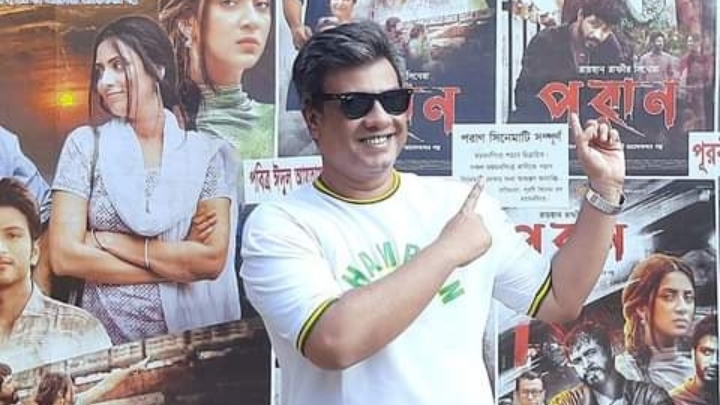 Raihan Rafi’s ‘Poran’ is leading at the box office so far among the three films released this Eid. Along with the love of the general audience, the entire ‘Poran’ team is floating in the wishes and appreciation of the stars of the country. And one of the pillars of this team is the film’s co-screenwriter and dialogue writer Shahjahan Shourov. Based on a tragic incident in Barguna, the love triangle ‘Poran’ lives up to the hype it created after the release of the trailer, song, and the movie relies on the production of Munsiana, the skill of the actors and the witty screenplay and lively dialogues. And as a bonus, it is also true that the popularity of every song in the movie has drawn the audience to the theatres.

Those who watched ‘Poran’ in theaters clapped, and whistled many dialogues during the movie which entertained the audience as well as helped them relate to the story of the movie. And Shahjahan Shourov’s aesthetic display of his skill in this department and his ability to understand the pulse of the audience’s thoughts is commendable. Depending on the demand of the screenplay in the dialogue, sometimes comedy, sometimes full of romance. Sometimes there is suspense and sometimes there is abuse in the scenes of action or violence, which undoubtedly gave momentum to the story of the movie. It is sad but true that even in our country a fiction writer is not valued that way most of the time.

That’s why many talented and potential writers lose interest in working in this space. If a writer does not get what they deserve in economics and psychology, why should they spend their time and knowledge in this field? Many still work through gritted teeth, determined to hold themselves in a place of love and affection. But the pain and shame of not seeing their name on the screen of the cinema easily take their interest in working in this place to zero. Shahjahan Shourov has already appeared in four movies with his writing credits in the biggest medium of entertainment. And here the remarkable thing is that Shahjahan Shourov has worked as an important pillar behind the camera in all the four movies that were praised and talked about. Although he worked as a dialogue writer in the previous three movies, he handled the two departments of screenplay and dialogue in the movie ‘Paran’. Shahjahan Shourov has worked with Rafi on the screenplay with the aim of presenting good work.

As a storyteller or a dialogue writer, his continued attachment to this good work is an indication of his interest and desire to do good. Compared to the previous three films, ‘Poran’ undoubtedly took Shahjahan Shourov a long way. He is enjoying equal success with Raihan Rafi in the screenplay of the movie. Both virtuosos and understanding the audience’s pulse, Young’s thoughts and efforts to gift some diverse audiences have been hugely successful. But there is no one who did not appreciate his dialogues in this movie. With each scene, the dialogue as per the demand of the screenplay is like gold. In the days to come, Shahjahan Shourov will spread through his pen like the fragrance of flowers through the vast medium of cinema.