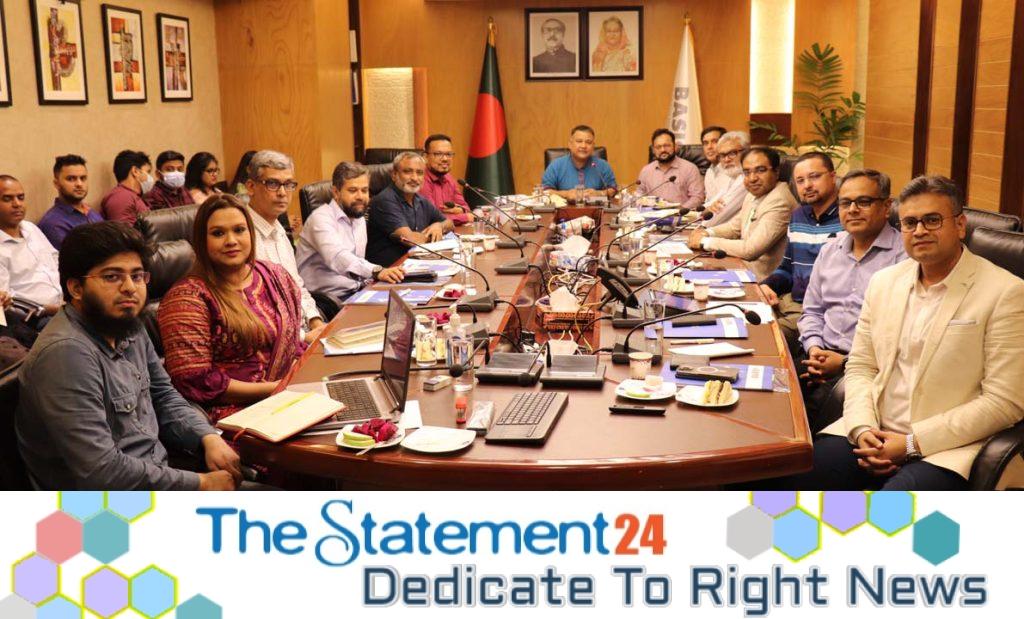 A roundtable dialogue on mitigating the ICT skill gap was held on 30 July 2022 in BASIS moderated by Mr. AKM Ahmedul Islam BABU, Director of BASIS in collaboration with TechnTalents. Discussants expressed to have a different pay scale with a unique hierarchy for tech professionals and a separate law for knowledge-exercising human resources engaged in the ICT sector while addressing a meeting at Bangladesh Association of Software and Information Services (BASIS) in the capital on Saturday.

The discussion focused on the mitigation of the ICT skills gap and existing ICT literacy, activities to be taken by the private sector and academia ranging from short run to long run, and sought government policy support to help make the human resources future-ready led by the private sector.

Sharing his opinion, Mr. AKM Ahmedul Islam BABU said, “The gap in the collaboration between human resource management in the private sector and academia should be addressed immediately for reaching the SMART Bangladesh vision of the present government”. He added, that we need to empower and encourage fresh graduates in IT, and that needs to be started from school.

Mr. M Rashidul Hasan said, “Bangladesh should introduce registration for tech professionals and also should make a database of existing manpower working in the ICT sector following the example of RMG sector at the earliest to understand future needs through research-based approach”, other participating experts echoed the same. He claimed, that the unemployment rate among graduates has been increasing over time due to a lack of research and collaboration between industry and universities. The commercialization of research is missing in the Key Performance Indicators (KIPs) of the universities in most cases, he added and recommended, that once the industry-academia bridging is established, the gap between demand and supply in human resources will also reduce gradually.

Mr. Md Humayun Kobir stated that, in the face of the fourth industrial revolution, the government is providing freelancing-enabling IT training courses for helping the youth to become self-reliant and to earn foreign currencies by offering their services on international platforms. During the pandemic situation, many freelancers showed their excellence in performance with foreign workstations rather than becoming job-seekers and adding a burden to the national economy by remaining unemployed, he added.

In the keynote, TechnTalents founder Mohammed Asif focused on the growing demand for skilled resources in artificial intelligence, machine learning, Cloud and emerging technologies and jobs of techno-business skills like business analyst, IT sales and project management. “There are many graduates who go abroad to take better opportunities. However, if we can ensure them better facilities in the country then it will be beneficial for us to harness their skills as well as helpful for our ICT companies”, he said. He emphasized tech graduates should take full-time jobs for 2-3 years to gain professional experience first before freelancing or starting their own business. According to a survey by IDC, there will be 150 million new technology jobs globally in the next five years, he added.

In his speech, Dr. Dip Nandi said the faculty members can include the topics of emerging technologies in courses only as universities have little chance to update the curriculum.

Mr. Raihanul Islam recommended a unique structure of hierarchy of resources as the employers can offer benefits for the staff accordingly.

Mr. Sami Al Islam said that the country has missed the benefits of demographic dividends as the growth of the working group population is declining over time, meanwhile, he echoed Asif’s keynote point that among the top 10 jobs in the next five years DevOps Engineer, IT Security and AI/ML Engineer will require the most skilled talents.

Mr. Abdulla Al Mamun said the government can introduce a human resource development fund as the tech companies can up-skill the resources for long time benefit of the country.

The moderator of the roundtable, Mr. AKM Ahmedul Islam BABU concluded the roundtable by saying, “We need the involvement of BASIS here to share the demand of industry among the universities as the academia can update the students with new topics. We should lead the students in a special field from the fourth year as they can drive on respective industries with specialized skills as we aim to achieve US$ 5 billion from software and ITES export in the next three years and to have greater pie in the local market”.