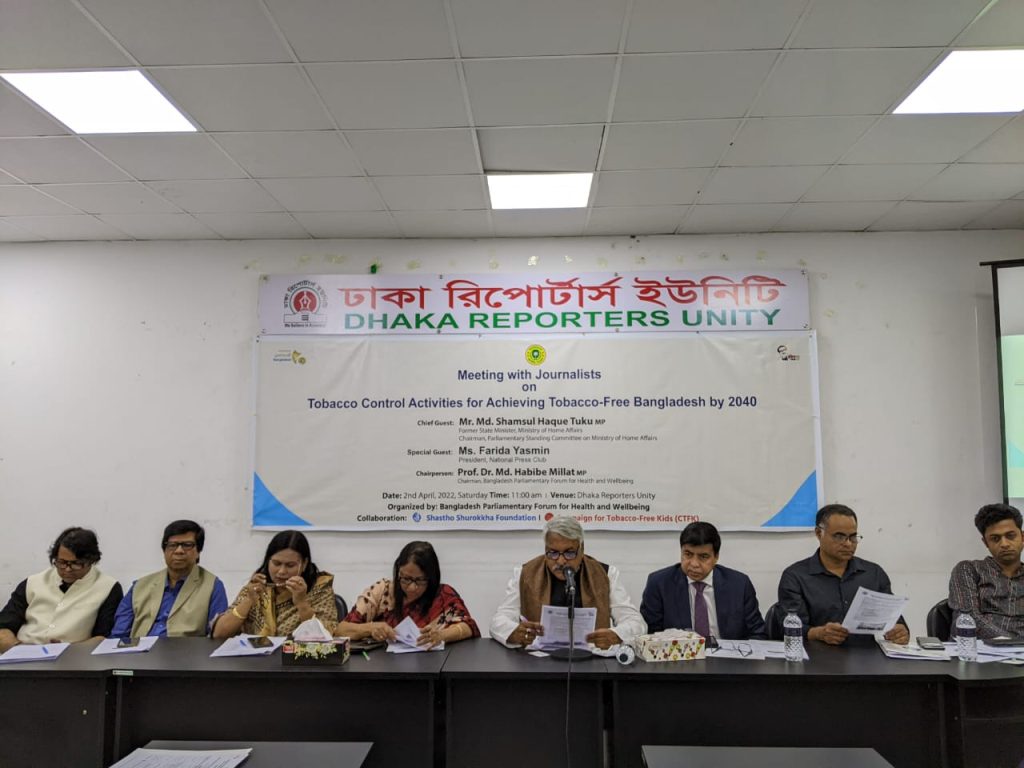 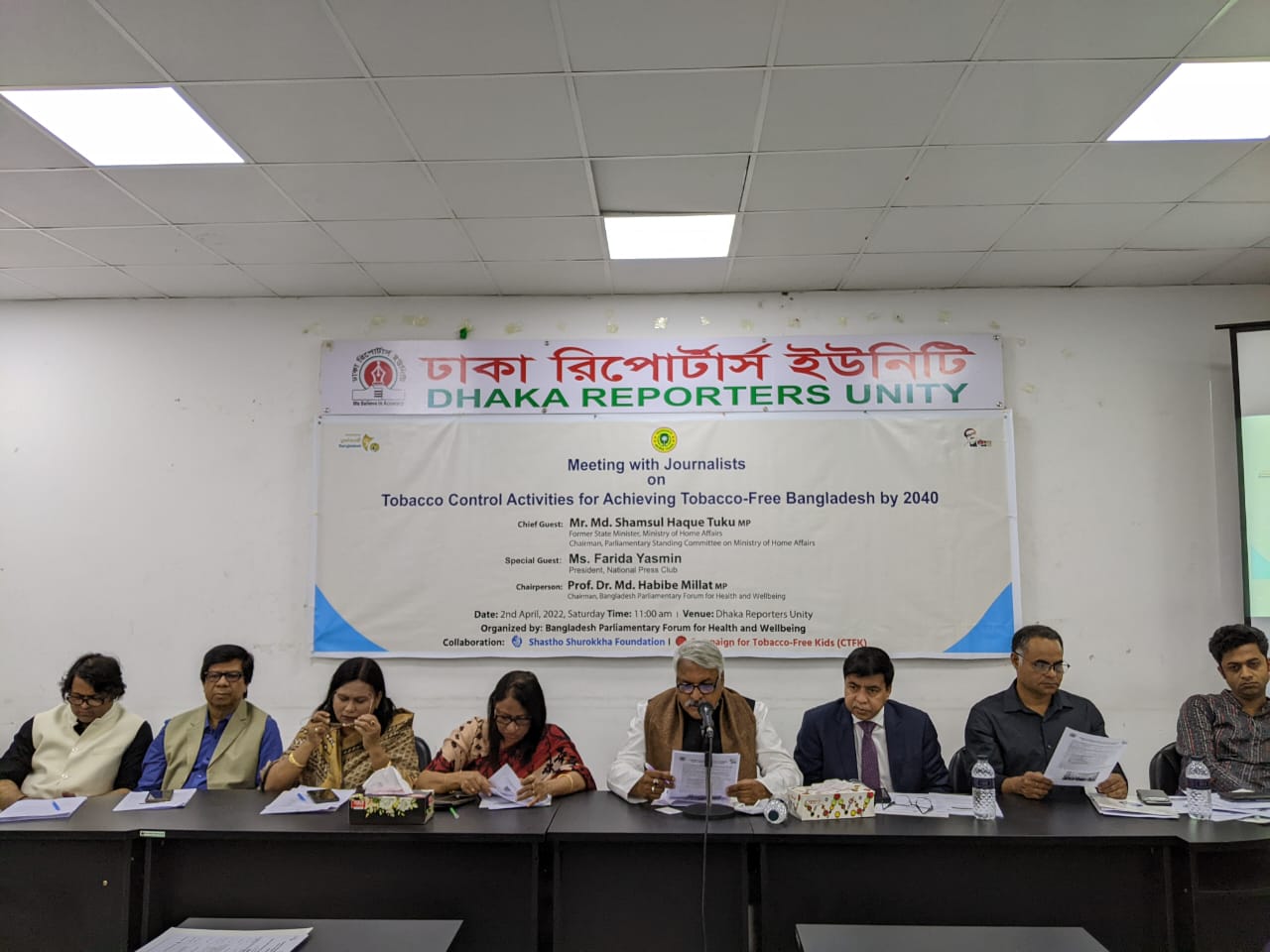 Every year, 67% of the country’s total deaths are due to non-communicable diseases (NCDs), mainly due to the use of tobacco products. Realizing this harmful effect of tobacco, Hon’ble Prime Minister Sheikh Hasina has announced to make Bangladesh tobacco free by 2040. ‘Bangladesh Parliamentary Forum for Health and Wellbeing’ is a forum related to public health formed by members of parliament, working to achieve tobacco-free Bangladesh by 2040 as the Prime Minister declared. The forum wants to work at all levels to achieve the national goal.

These issues came up during a discussion meeting with the journalists on April 2, Saturday at the Nasrul Hamid Auditorium of Dhaka Reporters’ Unity (DRU) on ‘Tobacco Control Activities to Achieve a Tobacco-Free Bangladesh by 2040′.

Former State Minister for Home Affairs and Chairman of the Parliamentary Standing Committee on the Ministry of Home Affairs, Mr. Md. Shamsul Haque Tuku MP was present as the Chief Guest on the occasion. National Press Club President Mr. Farida Yasmin and Adiba Anjum Mita MP were present as special guests. The meeting was presided over by Prof. Dr. Md. Habibe Millat MP.

Mr. Md. Shamsul Haque Tuku MP said that, ‘‘Hon’ble Prime Minister is committed to protecting the public health of the people of the country, which leads to the declaration of making Bangladesh tobacco-free by 2040.’ said that a tobacco free Bangladesh should be built by 2018 and 2040. There are tobacco control laws, but there are gaps in the law. People including women, children, and students are all being harmed due to smoking. But this could not be solved only through government and administration. The law should be amended as well as the media should step in. We are also very vocal about increasing taxes and price in tobacco products. We will also increase tobacco price and tax in the coming national budget.’

Special Guest Adiba Anjum Mita MP said, ‘We have to introduce more anti-tobacco activities in our country. Numbers of families have lost everything due to the harmful effect of tobacco. Tobacco is the main cause of lung cancer, oral cancer etc. To prevent that amending of tobacco control law and taxation is the utmost priority now.’

Around 3 crore 78 lakh adults in the country use one or another tobacco product. About 61,000 children a year are infected with tobacco-related diseases without smoking. 1 lakh 61 thousand people die every year due to tobacco related diseases. Realizing the awfulness of tobacco, the Prime Minister has announced to make the country tobacco free by 2040. Stakeholders feel that there is no alternative to amending the Smoking and Tobacco Products (Control) Act to implement that goal.

Earlier, Dr. Nizam Uddin Ahmed, Executive Director of Shastho Shurokkha Foundation and Public Health Specialist presented the important aspects of amending the Tobacco Act. In his presentation, it was mentioned that it is necessary to add some issues by amending the existing tobacco control laws. These include a complete ban on smoking in public places and public transport, a ban on the display of tobacco products in sales outlets, a complete ban on the corporate social responsibility (CSR) activities of tobacco companies, and the absence of single sticks / packaging of bidi-cigarettes These include banning the sale of products, banning e-cigarettes and heated tobacco products (HTP) and increasing the size of health warnings illustrated in packets / boxes of tobacco products.

Chairman of the forum Prof. Dr. Md. Habibe Millat MP highlighted the various successes of the forum in tobacco control. He said, “Members of Parliament are carrying out various activities for the protection of public health through Bangladesh Parliamentary Forum for Health and Wellbeing. In its continuation, we are working on tobacco control on behalf of the forum. At various times, the Hon’ble Speaker, Deputy Speaker, Minister of Health, Minister of Planning, Minister of Information and other concerned organizations have participated in these activities and expressed solidarity, which will accelerate the achievement of our goals. Following this, on behalf of the Forum, we have sent a letter signed by 152 Members of Parliament along with the Minister of Health requesting to amend the existing Tobacco Control Act.’

Along with 153 Members of Parliament, have requested the Hon’ble Prime Minister to issue a DO letter to amend the Tobacco Act including e-cigarettes. We all want to take this activity forward and make Bangladesh tobacco free.”
Along with these, president and general secretary of Dhaka Reporters Unity (DRU) Mr. Nazrul Islam Mithu, Nurul Islam Hasib, Director of Shastho Shurokkha Foundation Mr. Rafiqul Islam, Advisor of Campaign for Tobacco –Free Kids Mr. Ataur Rahman Maud and other delegates from numbers of organization took part.