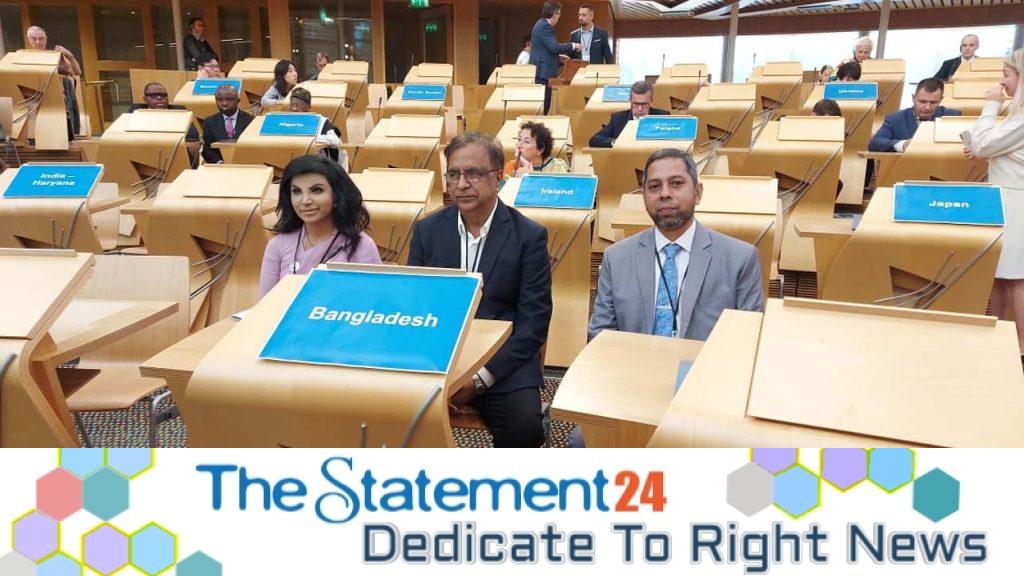 The British Council has partnered with the sixth Edinburgh International Culture Summit, is being held on the occasion of Edinburgh’s 75th anniversary as a Festival City at the Scottish Parliament from August 26-28, 2022. K M Khalid, Minister of State, Ministry of Cultural Affairs, is representing Bangladesh at the grand cultural exchange.

The summit aims to offer a unique and global opportunity to inspire a positive change and lasting impact through cultural policy and investment. The event’s overarching theme reflects one of the major concerns of our time – Culture and a Sustainable Future.

Partners of the event, including the British Council, Edinburgh International Festival, Scottish Parliament, and the Scottish and UK Governments, have welcomed artists, Culture Ministers, and global influencers from across the world to the sixth Edinburgh International Culture Summit. K M Khalid, Minister of State, Ministry of Cultural Affairs, attended the Summit representing Bangladesh, with a delegation including Kazi Nurul Islam, Deputy Secretary (Cultural Exchange Section), Ministry of Cultural Affairs; and Nahin Idris, Head of Arts, the British Council.

At the world’s leading cultural exchange, the Minister of State for cultural affairs has shared Bangladesh’s cultural position and examples of practice with the gathering of other ministers from across the globe, alongside cultural, academic, and industry leaders.

Over three days at the Scottish Parliament, the Summit will address Culture and Freedom, Culture and Education and Culture and Sustainability across a plethora of cultural, social, environmental, and political challenges experienced across the world. Each theme is the focus of a plenary session in the Debating Chamber of the Scottish Parliament, supported both by private policy discussions and workshops. Culture Ministers from across the globe are in the process of announcing their attendance at the first physical Culture Summit to take place in Edinburgh since 2018.

Contributing to the conversation on Culture and Education, keynote presentations will be given by international violinist and Director Designate of the Edinburgh International Festival Nicola Benedetti and Deirdre Quarnstrom, Vice President of Education Experiences at Microsoft Education.

Ministers and contributors will explore practical steps to ensure environmental sustainability across a wide range of artistic activities. There will be many more voices from around the world, including Mina Girgis, founder of the Nile Project; and Dame Meg Taylor, who served as Secretary General to the Pacific Islands Forum until 2021. Extraordinary young artists and cultural leaders will also share their vision for the future and inspire multinational, cross-generational cultural exchange.

K M Khalid, Minister of State, Ministry of Cultural Affairs, Government of Bangladesh, said, “We have been working towards achieving a culturally sustainable Bangladesh and have been working with different development partners like the British Council and UNESCO. We truly believe that these international collaborations are the heart of our work for a culturally balanced sustainable Bangladesh. A “whole-of-society” approach has been adopted to accelerate the SDGs implementation. In our journey, we believe in the motto that no one will be left behind as we aspire to build an equal, progressive, peaceful, and prosperous country.”

Sir Jonathan Mills, Director of the Edinburgh International Culture Summit Foundation, said, “We’re thrilled to be returning to an in-person Culture Summit at the Scottish Parliament during Edinburgh’s world-famous festivals as they celebrate their 75th year. The Summit’s Partners – the British Council, Edinburgh International Festival, Scottish Parliament, the Scottish & UK Governments – have come together again to advocate strongly for the power of culture to transform lives and societies, even in the most challenging circumstances.”