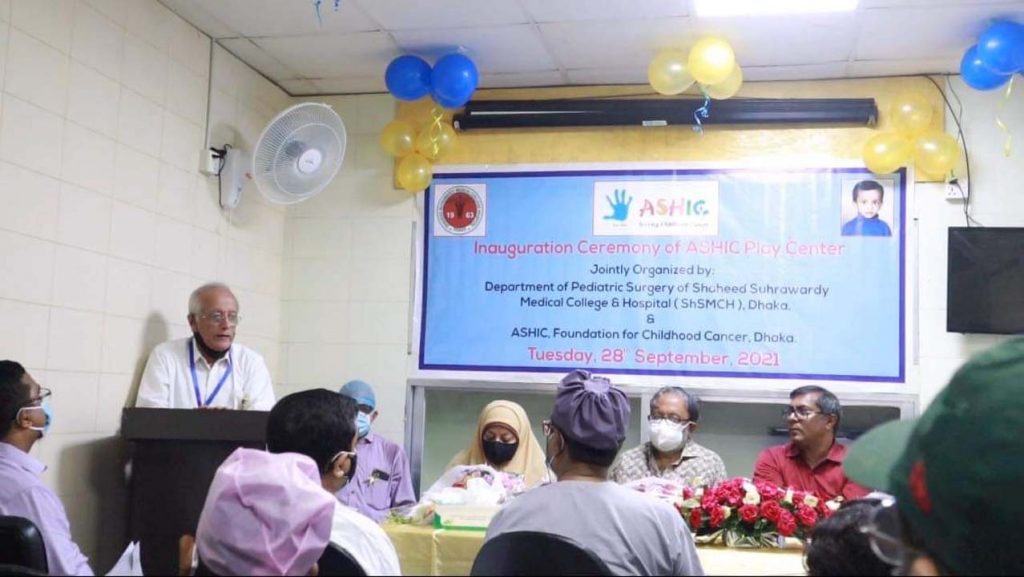 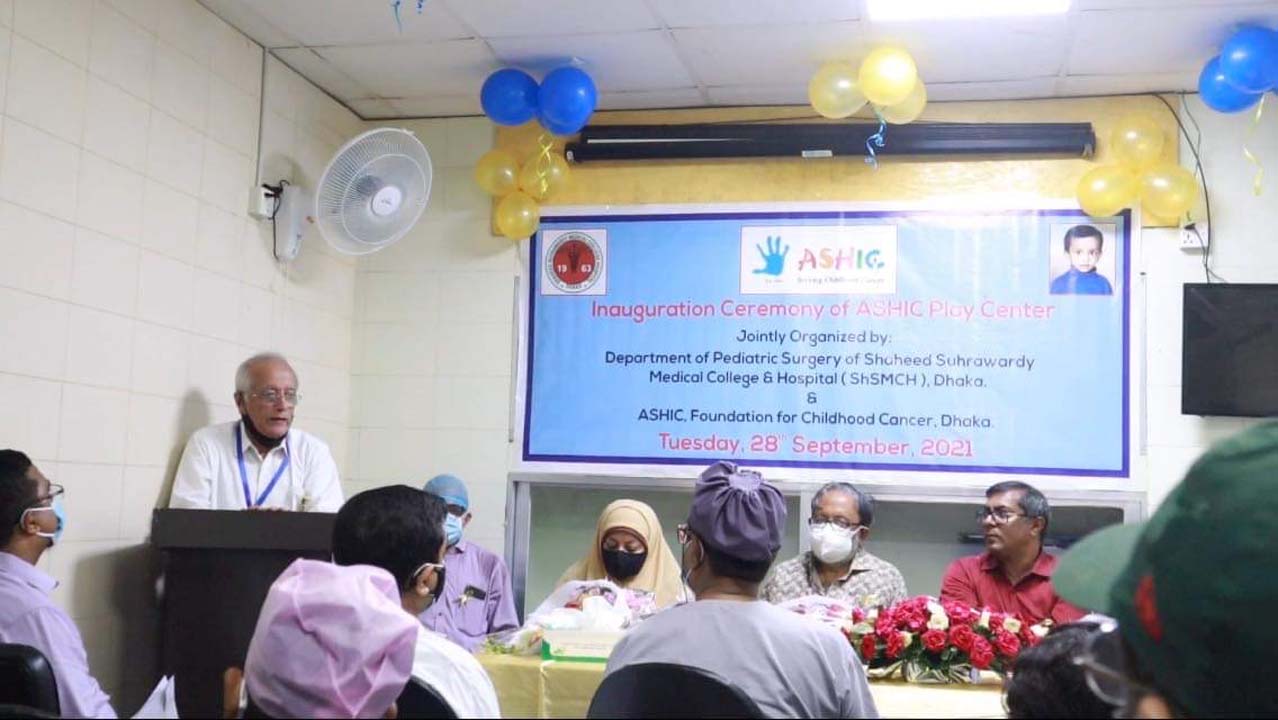 In celebrating the 75th Birthday of Honourable Prime Minister Sheikh Hasina, ASHIC Foundation for Childhood Cancer initiated and launched its 5th Play Center as ‘Children’s Corner’ at the Child Department of Shaheed Suhrawardy Medical College and Hospital with the view to create a friendly environment for the treatment-seeking children. The head of the pediatric surgery department Dr. Mirza Kamrul Zahid inaugurated the Play Center graced with the presence of the Founder Chairperson of ASHIC Foundation Salma Chowdhury and Founder President Mr. Afzal Hossain Chowdhury. Associate Professor of Suhrawardy Hospital Dr. Paritosh Kumar Palit, Head of Pediatrics Department of Children Medical College Hospital Dr. Nazma Begum as well as a host of doctors also attended the occasion.

The inauguration commenced with the ribbon-cutting at ward-13 of the Pediatric Surgery Department followed by a discussion session held at the adjacent seminar hall. Founding Chairperson of ASHIC Foundation Salma Chowdhury in her speech thanked the authorities and the doctors of the hospital for their cooperation in setting up the play center. She also mentioned that the month of September is celebrated worldwide as ‘Child Cancer Awareness Month’ in which ‘Play-therapy’ is considered as an essential part of the treatment process. At the play center, children can forget their pain while being immersed in the games and entertainment that in turn, drives away the fear of treatments or the sadness of being bound at the hospital from the child’s mind.

Mr. Afzal Hossain Chowdhury, Founding President of the foundation, said, we are deeply touched by the great cooperation that you have shown in the implementation of ASHIC’s small enterprise. Since 1994, ASHIC Foundation for Childhood Cancer has been working to improve the quality of lives of children for the last 26 years. Notable in this regard, among other initiatives, are ASHIC Shelter, ASHIC Palliative Care Unit (PCU), Support-a-Life, ASHIC Play Center and ASHIC Patient Service.

Doctors and speakers noted the launching of this play-center by a private initiative e.g. ASHIC Foundation in a government hospital is undoubtedly a noble venture. Children who come to this hospital for treatment are usually admitted to the surgery ward with the aim of correcting their congenital defects. The treatment process can sometimes be long-term. In that case, this play-center will make a very deep impression on the children’s minds so that they do not get depressed and can be physically and mentally energized. They also mentioned that this kind of humane initiative of ASHIC will set up a unique model before the affluent others in Bangladesh and encourage them to come up stand by our children.