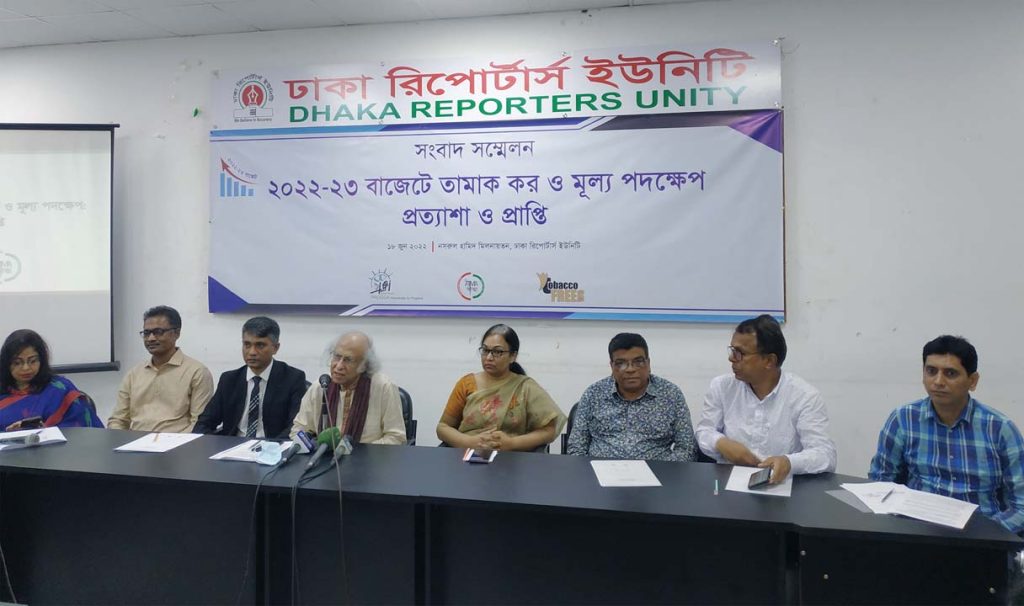 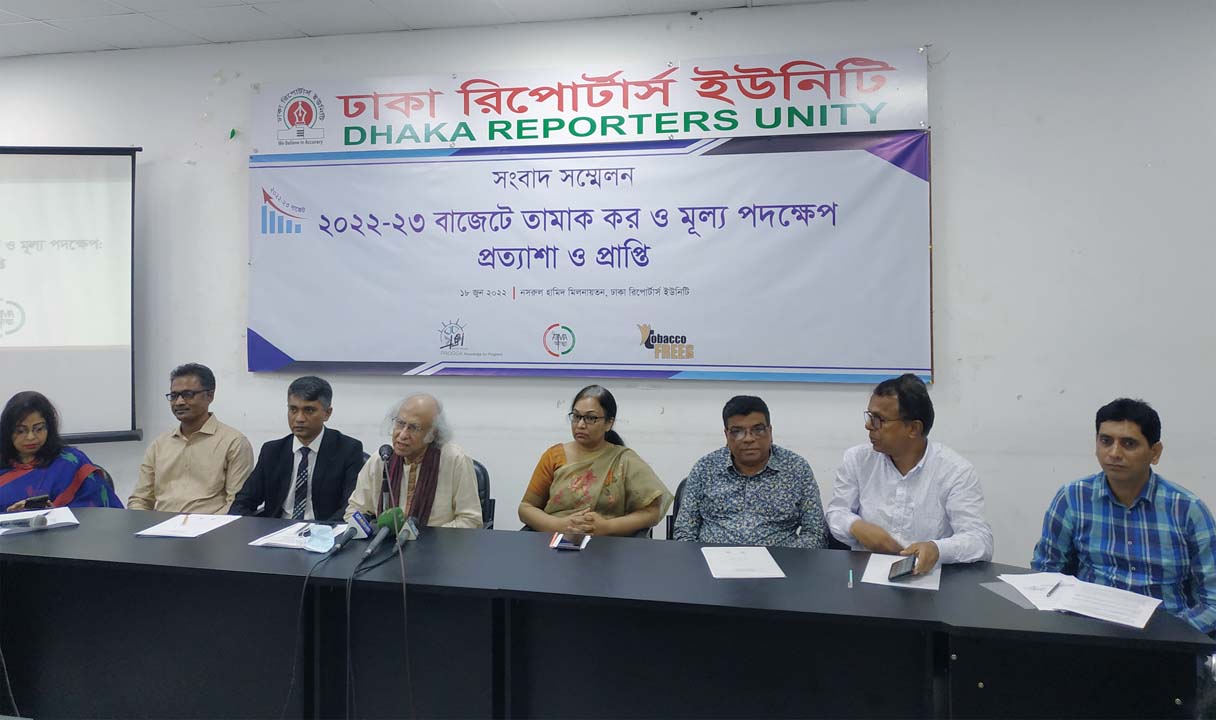 The proposed budget for FY 2022-23, if finally adopted and realized, will increase the use of cigarettes and other tobacco products among the poor and the youth. It will deprive the government of additional revenue and, at the same time, hike health expenditure. As the proposed budget has kept the supplementary duty unchanged and failed to introduce a specific tax system, the opportunity for tobacco companies to exponentially expand their profit remains wide open. Speakers said this today (18 June 2022, Saturday) during a post-budget press conference, jointly organized by PROGGA (Knowledge for Progress) and Anti-Tobacco Media Alliance (ATMA) held at the Nasrul Hamid Auditorium of the Dhaka Reporters Unity. The event was supported by the Campaign for Tobacco-Free Kids (CTFK).

It was informed in the post-budget press conference that the proposed budget raises the price for low-tier cigarettes by only 2.56 percent. 75 percent of all cigarette smokers are users of low-tier cigarettes, most of whom belong to the poor and the youth demographic categories. The medium, high, and premium tiers have seen a 3.17 percent, 8.82 percent, and 5.18 percent increase respectively.

Citing the Bangladesh Bureau of Statistics (BBS), speakers say that 2022 (provisional) has seen a 10 percent increase in the National Per Capita Income (nominal) over the previous year. Compared to the increase in per capita income, the hike in cigarette price will only make cigarettes more affordable and particularly encourage the youth to light up.

Speakers presented a comparative analysis of the average prices of essential commodities in the four metropolitan cities of Bangladesh (Dhaka, Chattogram, Rajshahi, and Khulna), as published on a daily basis by the Department of Agricultural Marketing (DAM), and said that the average price of soyabean oil has increased 45.18 percent in 2022 (June 8) compared to 2021 (June 8). There has also been a significant increase in the prices of atta (44.63 percent), eggs (34.03 percent), lentil (25.43 percent), powdered milk (18.19 percent), broiler chicken (16.63 percent), and miniket rice (12.5 percent). However, the price of low-tier cigarettes, which constitute 75 percent of the cigarette market, has seen a meagre 2.56 percent rise, and the prices of jarda, gul, and bidi have been kept unchanged. As a result, tobacco products will become much cheaper compared to essential commodities, encouraging the youth and the poor to get hooked on this deadly addiction and putting public health in grave danger.

It was also discussed in the press conference that the supplementary duty on low-tier cigarettes has been kept unchanged at the existing 57 percent while the retail price has seen Taka 1 increase. Such an arrangement means that a significant portion of this additional revenue generated from this increase will be pocketed by tobacco companies. The World Health Organization (WHO) recommends that the supplementary duty be at least 70 percent of the retail price. Besides, ignoring the anti-tobacco organizations’ demand to introduce specific supplementary duties will complicate revenue collection and allow tobacco companies to benefit from rampant tax evasion and other ways.

In his speech as the chief guest of the event, eminent economist and convener of the National Anti-Tobacco Platform, Dr. Qazi Kholiquzzaman Ahmad said, “In the highly-used low-tier cigarettes, the price has been increased by only 10 paisa per stick. The prices of jarda, gul and bidi have not been increased at all. This will do nothing to reduce tobacco use. In contrast, if the government implements our proposals, it will exponentially increase revenue earning and facilitate building a tobacco-free country.” Dr. Mahfuz Kabir, Research Director of Bangladesh Institute of International and Strategic Studies (BIISS), said, “The price of tobacco products should be hiked by imposing the specific supplementary duty. It will reduce the complicacy in revenue collection, make it easier to predict revenue accumulation and above all, help the National Board of Revenue to advance a step towards the implementation of a simple tobacco tax policy as declared by the Honorable Prime Minister.”

The following proposals have been presented in the press conference to be included in the finalized FY 2022-23 budget:

Introducing specific supplementary duty in the finalized budget and raising the prices of cigarettes and other tobacco products as mentioned above, will encourage 1.3 million adults to quit smoking, and in the long run, prevent the deaths of 445,000 adults and 448,000 youths, and generate additional revenue worth BDT 9,200 crores from cigarettes alone as supplementary duty, health development surcharge, and VAT.