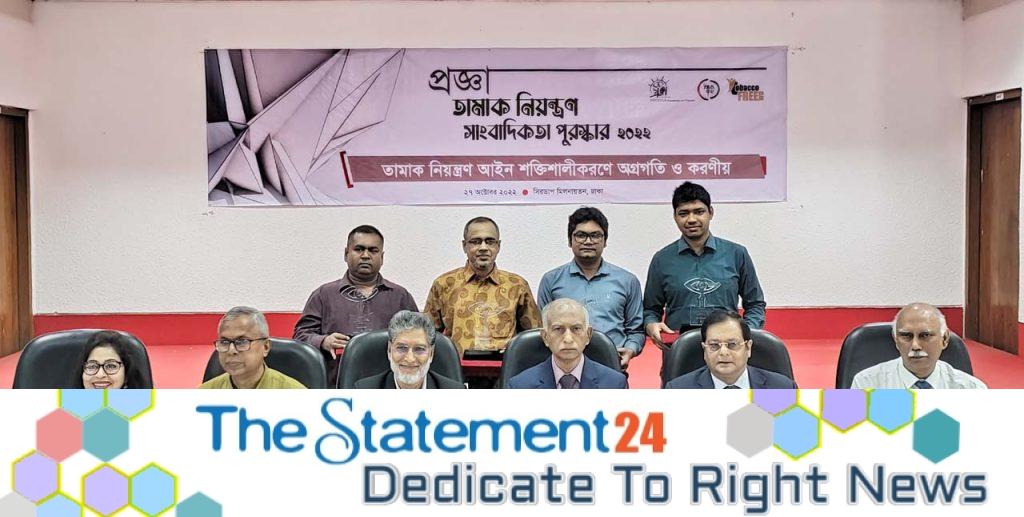 The Ministry of Health and Family Welfare’s (MoHFW)’s initiative to strengthen the tobacco control law is a timely one. To reduce the deaths and losses incurred by tobacco, the draft amendment must be finalized and passed at the earliest. Speakers said this today (27 October 2022, Thursday) during the PROGGA Tobacco Control Journalism Award held at the CIRDAP Auditorium of the Capital. Journalists who won the awards received BDT 50,000, a certificate and a crest. The winners of the accolade include Shamimul Haque, Joint Editor, the Daily Manabjamin and Mohammad Al Amin, Senior Staff Correspondent, the Daily Sun (under the Print Media category); Mosabber Hossain, Senior Reporter, the Daily Prothom Alo (under Online Media category); and Anowar Hossain, Staff Reporter, Desh Television (under TV Media category). The event was jointly organized by PROGGA (Knowledge for Progress) and Anti-Tobacco Media Alliance (ATMA), with support from Campaign for Tobacco-free Kids (CTFK).

In his speech as the Chief Guest of the event Professor Dr. A A M S Arefin Siddique, former Vice-Chancellor of Dhaka University, said, “Currently, public opinion is largely in favor of the amendment of the tobacco control law. So, the draft amendment must be finalized at the earliest. ” Speaking as the special guest at the event, Md. Mostafizur Rahman, Lead Policy Advisor for Campaign for Tobacco-Free Kids (CTFK)- Bangladesh said, “There is no alternative to strengthening tobacco control law to build a tobacco-free Bangladesh as envisioned by the Honorable Prime Minister.” Welcoming the government’s initiative to amend the law, Dr. Syed Mahfuzul Haq, National Professional Officer, World Health Organization (Bangladesh Country Office) said, “The journalists have played an effective role to help our policymakers understand why such an amendment has been of utmost importance.” Professor Dr. Arup Ratan Choudhury, President, MANAS, said, “The authorities must avoid getting derailed by tobacco companies’ ill tactics and make the existing law more in line with FCTC, as per the Prime Minister’s directive.” The event was chaired by ABM Zubair, Executive Director of PROGGA.

It was informed in the event that the Ministry of Health’s decision to eliminate provisions of Designated Smoking Areas (DSAs) in all types of public places and public transport is an effective measure to safeguard public health. It is not possible to protect non-smokers from secondhand smoke while keeping DSAs. Similarly, it is not possible to protect the youth from the menace of tobacco if the display of tobacco products and packs at points-of-sale (POS) is allowed. A total of 50 countries have already banned the display of tobacco products at POS. The draft amendment has also proposed a ban on tobacco companies’ engagement in corporate social responsibility (CSR) programs since these companies exploit such programs to promote their brands. The draft amendment also put forth a praiseworthy proposal to ban the sale of loose tobacco products with a view to curbing the affordability of tobacco products among children, adolescents and the youth. A ban on the production, import, sale and marketing of e-cigarettes, vaping, and heated tobacco products have also been proposed. It should be noted that 32 countries, including our neighboring India, have already banned such products.

It was informed that after completing a number of essential stages, the draft amendment is now on the verge of finalization. However, tobacco companies have launched a concerted campaign of lies and deceit to confuse the policymakers and thwart this initiative of the government. It should be noted that as per the WHO Framework Convention on Tobacco Control (WHO FCTC), there is no scope to consider the tobacco industry’s opinion while formulating tobacco control policies. Tobacco claims 161,000 lives in Bangladesh every year. Hundreds of thousands more fall ill and suffer from various disabilities due to tobacco use. Considering the vast death toll and other losses incurred by tobacco, the Honorable Prime Minister Sheikh Hasina has expressed her commitment to amend and strengthen the tobacco control law in line with WHO FCTC. Members of the ‘Pratyasha’ anti drug’s club youth group showed their support for the amendment of the tobacco control law by wearing skeleton masks at the event.