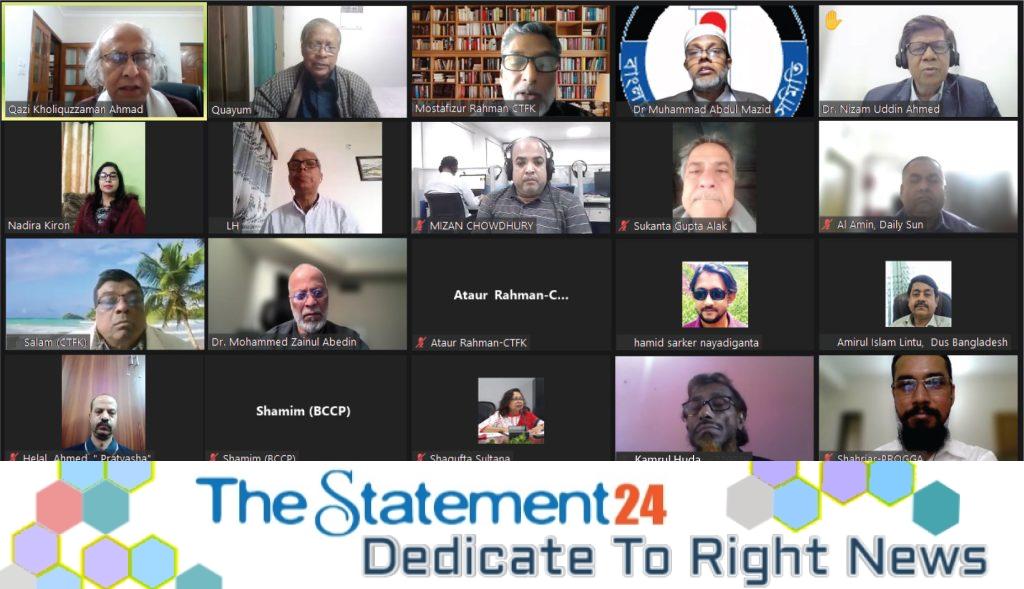 Tobacco has emerged as a major impediment to attaining Sustainable Development Goals (SDGs). To meet the SDG targets by 2030, there is no alternative to amending and strengthening the tobacco control law. This has been suggested today (27 December 2022, Tuesday) in a virtual discussion, attended by experts and tobacco control advocates, jointly organized by PROGGA (Knowledge for Progress) and Anti-Tobacco Media Alliance (ATMA), with support from Campaign for Tobacco-free Kids (CTFK).

It was informed during the event; tobacco claims about 161,000 lives and causes hundreds of thousands of disabilities every year in Bangladesh. This puts tobacco in grave conflict with achieving SDG-3 (Good Health and Well-Being). According to the World Health Organization (WHO), in families with tobacco users, 5 percent of total monthly expenditure goes to tobacco use and around 10 percent to treating tobacco-related illnesses. The health costs of tobacco use amount to Taka 30,500 crore. Thus, the tobacco makes the poor even poorer and works as an impediment to attaining SDG-1 (No poverty). Bangladesh ranks 14th in the world on the basis of the area used for tobacco cultivation, and 12th for tobacco production in quantity. The continual expansion of tobacco cultivation is threatening the country’s food security and sustainable agriculture (SDG-2). While gender equality is one of the most important targets set by SDGs (SDG-5), a large number of women fall victim to passive smoking, even though only 0.8% of women are smokers. Besides, in Bangladesh, about 30 percent of the total deforestation occurs for curing tobacco leaves which are increasing the climate change risks (SDG-13). 71 billion sticks, each containing single-use plastics, were produced in Bangladesh in FY 2020-21. Besides, a massive amount of cigarette butts and discarded boxes of jarda and gul end up in the ocean (SDG 14) each year. So, tobacco cultivation, production, marketing, and use of tobacco products are all obstructing Bangladesh’s bid to meet sustainable development goals on time. In January 2016, while addressing the South Asian Speakers’ Summit on Achieving Sustainable Development Goals (SDGs), the Prime Minister identified tobacco as an impediment to attaining SDGs, and expressed her firm commitment to amend the tobacco control law to make it more compliant with the World Health Organization’s Framework Convention on Tobacco Control (WHO FCTC).

Discussants said, the Health Ministry has very recently taken the initiative to amend the tobacco control law to facilitate the building of a tobacco-free Bangladesh by 2040 and the achievement of SDGs by 2030. However, tobacco companies have launched a concerted campaign of disinformation to mispresent different provisions of the proposed amendment and mislead the people, policymakers, and ministries. However, speakers at the event urged the authorities to finalize the draft at the earliest and not succumb to tobacco companies’ ill tactics.

Eminent economist and the convener of the National Anti-Tobacco Platform, Dr. Qazi Kholiquzzaman Ahmad said, “I would like to thank the Ministry of Health for taking the initiative to amend the law. Hopefully, the amendment proposals will be finalized as it is. It must be ensured that the companies cannot interfere in the amendment process. He further said that the government’s share in tobacco companies should be divested, and policymakers should prioritize the burden on public health incurred by tobacco rather than the revenue from this sector.”

Abdul Quayum, Associate Editor of the Daily Prothom Alo said, “We have to make the youth understand that they will be better off if they quit smoking. The risks of heart disease and cancer will decrease. The media also has a responsibility in this regard. I believe, if we want to build a tobacco-free Bangladesh by 2040, we need to take some steps like these besides strengthening the law.”

Md. Mostafizur Rahman, Lead Policy Advisor for Campaign for Tobacco-Free Kids (CTFK)- Bangladesh said, “Tobacco companies have no opportunity to argue against the damage their products cause to public health. So they are trying to obstruct the amendment and mislead the policymakers by spreading baseless and false information about mass lay-offs, loss of government revenue.”